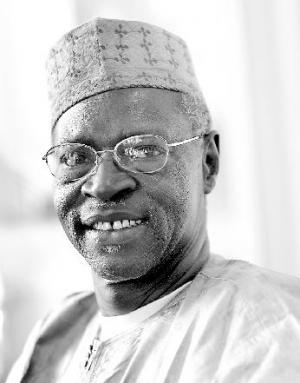 Ali Farka Toure has died of bone cancer in the Malian capital Bamako. He was in his late 60s.

Ali Farka Toure, who has died of bone cancer in the Malian capital Bamako in his late 60s, was the finest, most influential and best-loved guitarist in Africa. The "godfather of the desert blues", he was the first African musician to show, through his often hypnotic, rhythmic and self-assured playing, that the blues had originated in his home country, out on the edge of the Sahara.

His work certainly echoed the blues - and, in particular, the playing of John Lee Hooker - but it was a comparison that first boosted his career, and then infuriated him. He told me that he played African music, not blues, and that "this music has been taken from here. I play traditional music and I don't know what blues is. For me, blues is a type of soap powder."

Though Toure was the first of a long line of great musicians from Mali to find fame in the west, he insisted that music was not the only interest in his life. He toured the world and won his first Grammy for his 1994 collaboration with Ry Cooder, Talking Timbuktu, then retreated to his home town of Niafunke, on the banks of the Niger river in north-west Mali, where he devoted his time to farming and his role as the local mayor, spending the money he earned from his albums on irrigation and development schemes that transformed the region, making it self-sufficient for food.

In 2000 Toure announced that he had given up performing, but last year he had returned to music with a vengeance. His album, In the Heart of the Moon, recorded with the world's leading kora player Toumani Diabate, was an exquisite selection of gently virtuoso duets, and last June the duo played together at the Barbican in London. It was already clear that Toure was seriously ill, but he went ahead with the concert and a recording for BBC Newsnight despite being in considerable pain.

Last month, he won a second Grammy for the album with Diabate, but he was never to see the award. It was being taken out to him this week, along with the final mixes of his forthcoming album, by Nick Gold, of the World Circuit label, who had been a close associate since producing his first British release in 1987. He was too late, for Toure had died in his sleep. He was, said Gold, a man who for much of his life "found things easy", and had the confidence to succeed at almost anything he attempted, although he never went to school and could neither read nor write.

Born in Niafunke, Toure earned his nickname of Farka, or donkey (which is certainly no insult in Mali) because of his strength. He was the first surviving child in a family where nine elder brothers had died in infancy. He started out as a farmer, boatman, mechanic and tailor and became interested in music after watching religious spirit ceremonies on the banks of the Niger. First he learned to play such traditional instruments as the lute-like n'goni, the djerkel (a traditional single-stringed guitar) and the njarka violin. He switched to guitar after hearing the great Guinean guitarist Keita Fodeba, and insisting: "I have as much music as him."

His musical career began when he moved to the capital, Bamako, to take yet another new job - working as a sound engineer at Radio Mali. He started to broadcast and was able to record his own songs; the radio station owned what was then the only recording studio in Mali. With typical confidence, he began sending his tapes to recording companies in France, along with photographs of himself, and Sono Discs were wise enough to realise his potential.

A series of albums, all entitled simply Ali Farka Toure, were released for the Parisian African market in the late 1970s and early 1980s, and in 1986 the Red album (so-called because it had a red cover) came to the attention of the British DJ Andy Kershaw. He played it on his show, and the reaction was remarkable. Anne Hunt, of World Circuit, went out to Mali to track down Toure, and did so after putting out a radio appeal for him. He had by then returned home, having given up his job at the radio station, and was startled to learn he was a cult hero in Britain.

His life was transformed. In 1987 he travelled to London to record his first World Circuit album, produced by Gold and with Diabate standing in as calabash percussionist. The African and world music boom was just starting, and Toure became one of its leading celebrities, recording a series of albums that included his award-winning collaboration with Cooder. In 1999 he released the Niafunke album, recorded in his home town at a time when it seemed that farming had become more important to him than music, and he might never be seen on stage again.

His change of heart, and recent flurry of musical activity, was caused by his concern that young Malians did not know enough about their country's music, or the songs of the griots, the hereditary musicians. He began working with a group of n'goni players, including the brilliant Bassekou Kouyate, and the resulting album, which is believed to be similar in style to his classic early recordings, is scheduled for release in June. A second, as yet unreleased, album was recorded with Diabate prior to their Barbican appearance.

Toure had expressed the hope that he would die in his beloved Niafunke, where his funeral is to be held. His death marks the ending of one of the great stories in the history of African music.