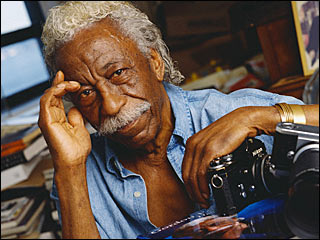 NEW YORK (AP) -- Gordon Parks, who captured the struggles and triumphs of black America as a photographer for Life magazine and then became Hollywood's first major black director with "The Learning Tree" and the hit "Shaft," died Tuesday, a family member said. He was 93.

Parks, who also wrote fiction and was an accomplished composer, died in New York, his nephew, Charles Parks, said in a telephone interview from Lawrence, Kansas.

"Nothing came easy," Parks wrote in his autobiography. "I was just born with a need to explore every tool shop of my mind, and with long searching and hard work. I became devoted to my restlessness." (Watch Parks describe how his powerful work could be a lesson for all -- 1:49)

He covered everything from fashion to politics to sports during his 20 years at Life, from 1948 to 1968.

But as a photographer, he was perhaps best known for his gritty photo essays on the grinding effects of poverty in the United States and abroad and on the spirit of the civil rights movement.

"Those special problems spawned by poverty and crime touched me more, and I dug into them with more enthusiasm," he said. "Working at them again revealed the superiority of the camera to explore the dilemmas they posed."

In 1961, his photographs in Life of a poor, ailing Brazilian boy named Flavio da Silva brought donations that saved the boy and purchased a new home for him and his family.

"The Learning Tree" was Parks' first film, in 1969. It was based on his 1963 autobiographical novel of the same name, in which the young hero grapples with fear and racism as well as first love and schoolboy triumphs. Parks wrote the score as well as directed.

In 1989, "The Learning Tree" was among the first 25 American movies to be placed on the National Film Registry of the Library of Congress. The registry is intended to highlight films of particular cultural, historical or aesthetic importance.

The detective drama "Shaft," which came out in 1971 and starred Richard Roundtree, was a major hit and spawned a series of black-oriented films. Parks himself directed a sequel, "Shaft's Big Score," in 1972, and that same year his son Gordon Jr. directed "Superfly." The younger Parks was killed in a plane crash in 1979.

Parks was born November 30, 1912, in Fort Scott, Kansas, the youngest of 15 children. In his 1990 autobiography, "Voices in the Mirror," he remembered it as a world of racism and poverty, but also a world where his parents gave their children love, discipline and religious faith.

He went through a series of jobs as a teen and young man, including piano player and railroad dining car waiter. The breakthrough came when he was about 25, when he bought a used camera in a pawn shop for $7.50. He became a freelance fashion photographer, went on to Vogue magazine and then to Life in 1948.

"Reflecting now, I realize that, even within the limits of my childhood vision, I was on a search for pride, meanwhile taking measurable glimpses of how certain blacks, who were fed up with racism, rebelled against it," he wrote.

"I dream terrible dreams, terribly violent dreams," he said. "The doctors say it's because I suppressed so much anger and hatred from my youth. I bottled it up and used it constructively."

In his autobiography, he recalled that being Life's only black photographer put him in a peculiar position when he set out to cover the civil rights movement.

"Life magazine was eager to penetrate their ranks for stories, but the black movement thought of Life as just another white establishment out of tune with their cause," he wrote. He said his aim was to become "an objective reporter, but one with a subjective heart."

The story of young Flavio prompted Life readers to send in $30,000, enabling his family to build a home, and Flavio received treatment for his asthma in an American clinic. By the 1970s, he had a family and a job as a security guard, but more recently the home built in 1961 has become overcrowded and run-down.

Still, Flavio stayed in touch with Parks off and on, and in 1997 Parks said, "If I saw him tomorrow in the same conditions, I would do the whole thing over again."

In addition to novels, poetry and his autobiographical writings, Parks' writing credits included nonfiction such as "Camera Portraits: Techniques and Principles of Documentary Portraiture," 1948, and a 1971 book of essays called "Born Black."

Recalling the making of "The Learning Tree," he wrote: "A lot of people of all colors were anxious about the breakthrough, and I was anxious to make the most of it. The wait had been far too long. Just remembering that no black had been given a chance to direct a motion picture in Hollywood since it was established kept me going."

Last month, health concerns had kept Parks from accepting the William Allen White Foundation National Citation in Kansas, but he said in a taped presentation that he still considered the state his home and wanted to be buried in Fort Scott.

Jill Warford, its executive director, said Tuesday that Parks "had a very rough start in life and he overcame so much, but was such a good person and kind person that he never let the bad things that happened to him make him bitter."