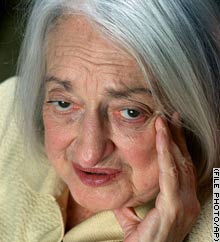 Betty Friedan, whose manifesto "The Feminine Mystique" became a best seller in the 1960s and laid the groundwork for the modern feminist movement, died Saturday, her birthday. She was 85.

WASHINGTON (AP) -- Betty Friedan, whose manifesto "The Feminine Mystique" became a best seller in the 1960s and laid the groundwork for the modern feminist movement, died Saturday, her birthday. She was 85.

Friedan died at her home of congestive heart failure, according to a cousin, Emily Bazelon.

Friedan's assertion in her 1963 best seller that having a husband and babies was not everything and that women should aspire to separate identities as individuals, was highly unusual, if not revolutionary, just after the baby and suburban booms of the Eisenhower era. (Watch: The life of an author and activist -- 2:41)

The feminine mystique, she said, was a phony bill of goods society sold to women that left them unfulfilled, suffering from "the problem that has no name" and seeking a solution in tranquilizers and psychoanalysis.

"A woman has got to be able to say, and not feel guilty, `Who am I, and what do I want out of life?' She mustn't feel selfish and neurotic if she wants goals of her own, outside of husband and children," Friedan said.

Friedan, she said, "was a giant for women's rights and a leading catalyst of the 20th century whose work led to profound changes improving the status of women and women's lives" worldwide. "The Feminine Mystique" helped to "define the lesser status of women," she said.

In the racial, political and sexual conflicts of the 1960s and '70s, Friedan's was one of the most commanding voices and recognizable presences in the women's movement.

As the first president of NOW in 1966, she staked out positions that seemed extreme at the time on such issues as abortion, sex-neutral help-wanted ads, equal pay, promotion opportunities and maternity leave.

But at the same time, Friedan insisted that the women's movement had to remain in the American mainstream, that men had to be accepted as allies and that the family should not be rejected.

"Don't get into the bra-burning, anti-man, politics-of-orgasm school," Friedan told a college audience in 1970.

To more radical and lesbian feminists, Friedan was "hopelessly bourgeois," Susan Brownmiller wrote at the time.

Friedan, deeply opposed to "equating feminism with lesbianism," conceded later that she had been "very square" and uncomfortable about homosexuality.

Nonetheless she was a seconder for a resolution on protecting lesbian rights at the National Women's Conference in Houston in 1977.

"For a great many women, choosing motherhood makes motherhood itself a liberating choice," she told an interviewer two decades later. But she added that this should not be a reason for conflict with "other feminists who are maybe more austere, or choose to seek their partners among other women."

By then in her 70s, Friedan had moved on to the issue of how society views and treats its elderly.

She said that while researching her last book, "The Fountain of Age," published in 1993, she found those who dealt with old people "talk about the aged with the same patronizing, `compassionate' denial of their personhood that was heard when the experts talked about women 20 years ago."

She had not stopped being a feminist, she said, "but women as a special separate interest group are not my concern any more."

Friedan, born February 4, 1921, in Peoria, Illinois, was a high achieving Jewish outsider growing up in middle America. Her father, Harry Goldstein, owned a jewelry store; her mother, Miriam, quit a job as a newspaper women's page editor to become a housewife.

As a girl, Friedan watched her mother "cut down my father because she had no place to channel her terrific energies, a typical female disorder that I call impotent rage," she said.

She won a fellowship in psychology to the University of California, Berkeley, but turned down a bigger fellowship there so as not to outdo a boyfriend.

The romance broke up anyway and Friedan moved to Greenwich Village in New York and became a labor reporter.

She lost one job to a returning World War II veteran but found another before marrying Carl Friedan, a summer-stock producer and later an advertising executive, in 1947. The marriage, which produced three children, ended in divorce 22 years later.

Friedan got a maternity leave to have her first child in 1949, but was fired and replaced by a man when she asked for another leave to have the second child five years later.

The family had moved to a big Victorian house in the suburban Rockland County village of Grandview-on-the-Hudson, New York, where Friedan cranked out freelance magazine articles while bringing up her brood.

Hoping to get a magazine piece out of a Smith College 15-year reunion, Friedan prepared an in-depth survey of her classmates.

What she found was that these well-educated women of the class of 1942, now largely suburban housewives, were asking, in effect, "Is this all?"

Friedan couldn't get the article published in a magazine, but five years of more research and writing turned it into "The Feminine Mystique."

If some women read it as a call to arms, others were outraged, Friedan recalled. Dinner invitations stopped; she was out of the school car pool.

But the first printing of 3,000 eventually grew to 600,000 copies hardcover and more than 2 million in paperback. The book was listed at No. 37 on a 1999 New York University survey of 100 examples of the best journalism of the century.

In 1964, the family moved back to Manhattan in 1964 and Friedan began working to have the federal government enforce the Civil Rights Act as it applied to sex and not only to race, religion and national origin.

Founding NOW was a response to federal inaction. The finale of Friedan's presidency was the national women's strike of August 1970, which brought women out across the country on the 50th anniversary of women's suffrage.

During the following decade she taught and lectured, and her 1981 book, "The Second Stage," was seen by many as a public break with the feminist leadership that had succeeded her. She said they had pursued "sexual politics that distorted the sense of priorities of the women's movement during the 1970s," and had opened the way for conservatives and reactionaries to occupy the center on family issues.

In "The Second Stage," Friedan also appeared to accept criticism from some women that "The Feminine Mystique" was too dismissive of domestic life. "Our failure was our blind spot about the family," she wrote.

Friedan taught on both coasts, at New York University and the University of Southern California, lecturing widely and traveling to women's conferences around the globe.

She helped persuade the Democratic Party to give women half the delegate strength at its nominating convention and was herself a delegate when Geraldine Ferraro was nominated for vice president in 1984.

She lived in New York City and Washington, D.C., and had a summer house in Sag Harbor, New York.

Carl Friedan died in December, according to Bazelon.

She said the funeral will be Monday at Riverside Memorial Chapel in New York.