Wilson Pickett, dies of a heart attack at age 64. 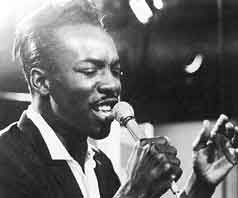 The soul pioneer best known for the fiery hits "Mustang Sally" and "In The Midnight Hour," died of a heart attack Thursday, according to his management company. He was 64.

RESTON, Va. (AP) Jan 19, 2006 — Wilson Pickett, the soul pioneer best known for the fiery hits "Mustang Sally" and "In The Midnight Hour," died of a heart attack Thursday, according to his management company. He was 64.

Chris Tuthill of the management company Talent Source said Pickett had been suffering from health problems for the past year.

"He did his part. It was a great ride, a great trip, I loved him and I'm sure he was well-loved, and I just hope that he's given his props," Michael Wilson Pickett, the fourth of the singer's six children, told WRC-TV in Washington after his death.

'The View' on Pets

A member of the Rock and Roll Hall of Fame, Pickett known as the "Wicked Pickett" became a star with his soulful hits in the 1960s.

"In the Midnight Hour" made the top 25 on the Billboard pop charts in 1965 and "Mustang Sally" did the same the following year.

Pickett was defined by his raspy voice and passionate delivery. But the Alabama-born picket got his start singing gospel music in church. After moving to Detroit as a teen, he joined the group the Falcons, which scored the hit "I Found a Love" with Pickett on lead vocals in 1962.

He went solo a year later, and would soon find his greatest success. In 1965, he linked with legendary soul producer Jerry Wexler at the equally legendary soul label Stax Records in Memphis, and recorded one of his greatest hits, "In the Midnight Hour," for Atlantic Records. A string of hits followed, including "634-5789," "Funky Broadway" and "Mustang Sally." His sensuous soul was in sharp contrast to the genteel soul songs of his Detroit counterparts at Motown Records.

As Pickett entered a new decade, he had less success on the charts, but still had hits, including the song "Don't Let The Green Grass Fool You."

In later years, he had legal problems and battled substance abuse; in 1994 he served jail time on an assault charge.

Besides his induction into the Rock and Roll Hall of Fame in 1991, he was also given the Pioneer award by the Rhythm and Blues Foundation two years later.