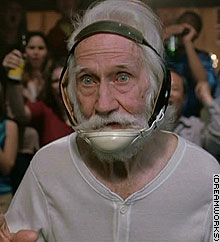 Patrick Cranshaw, who achieved cult-like status as fraternity brother "Blue" in the 2003 comedy "Old School," has died. He was 86.

LOS ANGELES, California (AP) -- Patrick Cranshaw, who achieved cult-like status as fraternity brother "Blue" in the 2003 comedy "Old School," has died. He was 86.

The veteran character actor died of natural causes Wednesday at his home in Fort Worth, Texas, his personal manager, Jeff Ross, told the Los Angeles Times.

Throughout his career spanning nearly 50 years, Cranshaw had dozens of roles, including a bank teller in "Bonnie and Clyde" and a demolition derby owner in "Herbie: Fully Loaded" (2005). Other credits included "Bandolero" (1968), "Best in Show" (2000) and "The Hudsucker Proxy" (1994), as well as television series "Mork & Mindy" and "The Dukes of Hazzard."

But he was probably best known for his role as elderly frat boy Joseph "Blue" Palasky in "Old School," starring Luke Wilson, Will Ferrell and Vince Vaughn.

In the hit comedy, he was about to wrestle two topless girls but dies of an apparent heart attack from overexcitment. After singing "Dust in the Wind" at Blue's funeral, Ferrell's character calls out in agony: "You're my boy, Blue!"

Fans would yell the signature line whenever they saw the actor and erected Web sites paying homage to his "Old School" character. He was even invited to meet with the Texas Rangers when they played the Angels in Anaheim.

"It was a great experience and an acknowledgment for him," Ross said. "He loved the recognition and would turn back and say, 'I'm your boy Blue."'

Cranshaw was born in Bartlesville, Oklahoma, in 1919 and became interested in acting while entertaining American troops before World War II.