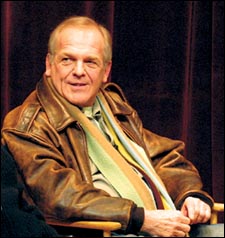 Actor John Spencer, who played the role of Leo McGarry in "The West Wing," mirrored his character in several ways: Both were recovering alcoholics and both were driven.

"Like Leo, I've always been a workaholic, too," he told The Associated Press in a 2000 interview. "Through good times and bad, acting has been my escape, my joy, my nourishment. The drug for me, even better than alcohol, was acting."

Spencer died of a heart attack Friday. In a sad parallel to life, his character on the show had earlier suffered a heart attack that forced him to give up his White House job.

Spencer died after being admitted to a Los Angeles hospital during the night, said his publicist, Ron Hofmann. He would have been 59 on Tuesday.

He was "one of those rare combinations of divinely gifted and incredibly generous," said Richard Schiff, who plays Toby Ziegler on the NBC series.

"There are very few personal treasures that you put in your knapsack to carry with you for the rest of your life, and he's one of those," Schiff said. He said Spencer had been struggling with health issues but seemed to have rebounded.

As McGarry, Spencer played the savvy and powerful chief of staff to President Josiah "Jed" Bartlet (Martin Sheen). In recent episodes, he was picked as a running mate for Democratic presidential contender Matt Santos, played by Jimmy Smits; the campaign against Republican Arnold Vinick (Alan Alda) has been a central theme for the drama this season.

"John was an uncommonly good man, an exceptional role model and a brilliant actor," said Aaron Sorkin, who created the series, and Tommy Schlamme, one of the original executive producers, in a joint statement.

"We feel privileged to have known him and worked with him. He'll be missed and remembered every day by his many, many friends," they said.

Actress Allison Janney, C.J. Cregg on the series, described Spencer as a consummate professional actor. "Everyone adored him," she said.

"We have all lost a dear, dear brother," said Bradley Whitford, who plays Josh Lyman.

NBC and producer Warner Bros. Television praised Spencer's talent but did not address how his death would affect the Emmy Award-winning series, in production on its seventh season.

Spencer, who also starred on "L.A. Law" as attorney Tommy Mullaney, received an Emmy Award for his performance on "The West Wing" in 2002 and was nominated four other times for the series.

Spencer grew up in Paterson, N.J., the son of blue-collar parents. With his enrollment at the Professional Children's School in Manhattan at age 16, he was sharing classes with the likes of Liza Minnelli and budding violinist Pinchas Zukerman.

As a teenager, he landed a recurring role on "The Patty Duke Show" as the boyfriend of English twin Cathy. Stage and film work followed. Then his big break: playing Harrison Ford's detective sidekick in the 1990 courtroom thriller "Presumed Innocent." That role led to his hiring for the final four years of "L.A. Law."

Spencer played a streetwise lawyer on the David E. Kelley drama that was in sharp contrast to the show's otherwise glamorous cast and setting.

After attending the Manhattan performing arts school, Spencer studied at Fairleigh Dickenson University. He then began working on stage in New York and in regional theaters, in plays including David Mamet's "Lakeboat" and Tennessee Williams' "The Glass Menagerie."

Spencer won an Obie Award for the 1981 off-Broadway production of "Still Life," about a Vietnam veteran, and received a Drama Desk nomination for "The Day Room."

His made his feature film debut with a small role in "War Games," which was followed by roles in "Sea of Love" and "Black Rain." Spencer said his work in "Presumed Innocent" represented a "watershed role."

In recent years, he worked both in studio and independent films, including "The Rock," "The Negotiator," "Albino Alligator," "Lesser Prophets" and "Cold Heart."

Spencer, an only child, is survived by "cousins, aunts, uncles, and wonderful friends," Hofmann said.