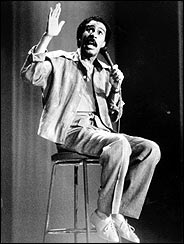 Richard Pryor, the caustic yet perceptive actor-comedian who lived dangerously close to the edge both on stage and off, has died, his ex-wife said Saturday. He was 65.

Pryor died of a heart attack at his home in the San Fernando Valley sometime late Friday or early Saturday, Flyn Pryor said. He had been ill for years with multiple sclerosis, a degenerative disease of the nervous system.

The comedian was regarded early in his career as one of the most foul-mouthed comics in the business, but he gained a wide following for his expletive-filled but universal and frequently personal insights into modern life and race relations.

His audacious style influenced an array of stand-up artists, including Eddie Murphy, Arsenio Hall and Damon Wayans, as well as Robin Williams, David Letterman and others.

A series of hit comedies in the '70s and '80s, as well as filmed versions of his concert performances, helped make him Pryor one of the highest paid stars in Hollywood. He was one of the first black performers to have enough leverage to cut his own Hollywood deals. In 1983, he signed a $40 million, five-year contract with Columbia Pictures.

His films included "Stir Crazy," "Silver Streak," "Which Way Is Up?" and "Richard Pryor Live on the Sunset Strip."