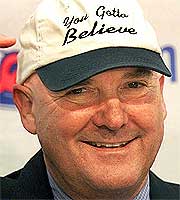 PHILADELPHIA (AP) - Tug McGraw, the zany relief pitcher who coined the phrase "You Gotta Believe" with the New York Mets and later closed out the Philadelphia Phillies' only World Series championship, died Monday. He was 59.

McGraw died of brain cancer at the home of his son, country music star Tim McGraw, outside of Nashville, according to Laurie Hawkins, a family spokesperson. He had been battling the disease since March, when he underwent surgery for a malignant tumor.

"He epitomized what Philadelphia is all about. He was hardworking, dedicated and never gave up," said Phillies manager Larry Bowa, who played with McGraw on the 1980 championship team. "He was a great person and will be missed."

McGraw's illness came as a shock to fans and friends alike last spring. He was at Phillies' training camp in Clearwater, Fla., as a special instructor, looking fine and acting as funny as ever. On March 12, he was hospitalized and the tumor was discovered. He later said there had been signs something was wrong. For example, he mistakenly showed up at the ballpark on an off day.

"We lost a piece of Mets history tonight," Mets owner Fred Wilpon said. "Tug was a battler on and off the field. We know how hard he fought this disease. He'll be sorely missed by all."
Especially former Phillies teammate and Hall of Famer Mike Schmidt.

"He put up a gallant fight," Schmidt said. "Publicly, he never let on that he had gotten a raw deal. He was Tug through the entire thing. As he always said, 'I front-loaded my life, just like my contract.' His passing is hard to take because his presence meant so much to people around him."
Bob Boone, the Phillies' catcher from 1972-81, remained a close friend, too.

"I know he got more living out of his 59 years than anybody," Boone said from his home in California. "What you saw was what Tug was. There was no phoniness at all. He loved people and loved life."

McGraw participated in the closing ceremonies for Veterans Stadium, which will be demolished next month. During the program, he re-enacted his final pitch of the 1980 World Series, striking out Kansas City's Willie Wilson for the title.
McGraw popularized the phrase "You Gotta Believe" during the Mets' 1973 NL championship season and carried the slogan through his illness, vowing he'd be on hand next month to push the button to bring down the Vet.

"Tug McGraw was one of the great characters of the game of baseball," said Hall of Famer Tom Seaver, McGraw's teammate with the Mets' 1969 championship team.
"He just had a joy for life and living. But what people sometimes overlook because he was always happy-go-lucky was what kind of competitor he was on the mound. No one competed with more intensity than he did."

McGraw was known for charging off the mound, slapping his glove on his thigh and tapping his chest after a close call.
"Patting his hand on his heart after a guy hits a home run foul, who would do that in the heat of the battle?" Bowa said. "But it showed he had no fear. He was loose. That's how he played the game."

A left-hander who threw a screwball, McGraw could be a bit of screwball himself.

Once asked whether he preferred to play on a grass field or an artificial surface, he said, "I don't know. I never smoked any AstroTurf."

McGraw's playful personality often overshadowed his talent. He played on three World Series teams and was an outstanding big-game pitcher during his 19-year career.
In 26 postseason games, he was 3-3 with eight saves and a 2.23 ERA.

A two-time All-Star, McGraw went 96-92 in his career with a 3.14 ERA and 180 saves. He made his major league debut with the Mets in 1965 at age 20 and finished with the Phillies in 1984.
After the 1974 season, McGraw was traded by the Mets to Philadelphia in a six-player swap that sent John Stearns to New York.

"The guy was a consummate professional on the mound but he relaxed in his own way," said Tim McCarver, a backup catcher for the Phillies and McGraw's teammate for five seasons. "He had his own way of doing things. There are more than one way to do things and Tug certainly had his own way."
After fanning Wilson for the last out of the 1980 Series, McGraw waited on the mound for Schmidt to come from third base and jump into his arms.

"That's the freeze frame when you look at that series," Bowa said.
It worked just the way Tug and Schmitty had planned it, too.
"Tug and I drove to the ballpark together before that final game and I made him promise that if he was on the mound for that final out to wait for me," Schmidt later recalled.

"Both of us knew whoever was on or near that mound for the final out would probably be on the cover of Sports Illustrated," he said. "Sure enough, it worked. Tug struck out Wilson and then turned to look at me at third base. Of course I came running in and jumped on him."

In addition to his son Tim, McGraw is survived by sons Mark and Matthew McGraw; a daughter, Cari Velardo, and four grandchildren. His daughter-in-law is country music star Faith Hill, the wife of Tim.

Funeral arrangements were not immediately available.