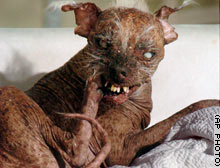 Sam, the dog whose ugliness earned him TV appearances, limousine rides and even a meeting with millionaire Donald Trump, has died, the Santa Barbara News-Press reported Tuesday.

The pooch with the hairless body, crooked teeth and sparse tuft of hair atop his knobby head died Friday, just short of his 15th birthday, said his owner, Susie Lockheed.

"I don't think there'll ever be another Sam," she said, adding wryly, "Some people would think that's a good thing."

Sam became an international celebrity after winning the ugliest animal contest at the 2003 Sonoma-Marin Fair in California -- a victory he twice repeated. The purebred Chinese crested hairless made appearances on TV in Japan, radio in New Zealand and in Britain's Daily Mirror tabloid, stayed in luxury hotels and met Trump on a talk show set.

Lockheed marketed his visage on T-shirts, a calendar and even a coffee "ugly mug."

At the time of his death, Sam was scheduled to be filmed for a Discovery Channel series on the world's ugliest species.

Lockheed said she was initially terrified of Sam when she agreed to take him in as a rescue six years ago on a 48-hour trial basis. Although she fell in love with him, his appearance repulsed her then-boyfriend and prompted the man to break up with her.

Later, however, Sam became a matchmaker by bringing together Lockheed and her current beau, who saw a picture of the two on an online dating site.

Lockheed said she had Sam euthanized after a veterinarian told her Sam's heart was failing.

She said she's felt a little lost ever since, and is sleeping with Sam's favorite toy -- a stuffed bear he picked up and carried home.

"I have snuggled Sam under my blankets on my bed for six years," said Lockheed, who has three other dogs named TatorTot, TinkerBell and PixieNoodle.