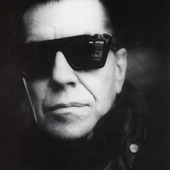 Guitar master Link Wray, the father of the power chord in rock 'n' roll who inspired such legends as Bruce Springsteen, David Bowie and Pete Townshend, has died. He was 76.

Wray died Nov. 5 at his home in Copenhagen, his wife and son said on his Web site. No cause of death was given, but his family said his heart was "getting tired." He was buried Friday after a service at Copenhagen's Christian Church.

"While playing his guitar he often told the audience, 'God is playing my guitar, I am with God when I play,'" his wife, Olive, and son, Oliver Christian, wrote. "We saw you go with God, you were smiling."

Wray, who played in his trademark leather jacket, developed a style considered the blueprint for heavy metal and punk music. He is best known for his 1958 instrumental "Rumble," 1959 "Rawhide" and 1963 "Jack the Ripper." His music has been featured in movies including "Pulp Fiction," "Independence Day" and "Desperado."

Wray, who was born in North Carolina and is three-quarters Shawnee Indian, is said to have inspired many other rock musicians, including Townshend of the Who, Springsteen, Bowie, Bob Dylan and Steve Van Zandt. All have been quoted as saying that Wray and "Rumble" inspired them to become musicians.

"He is the king; if it hadn't been for Link Wray and 'Rumble,' I would have never picked up a guitar,'" Townshend wrote on one of Wray's albums. Neil Young once said: "If I could go back in time and see any band, it would be Link Wray and the Raymen."

The power chord a thundering sound created by playing fifths (two notes five notes apart, often with the lower note doubled an octave above) became a favorite among rock players. Wray claimed because he was too slow to be a whiz on the guitar, he had to invent sounds.

When recording "Rumble," he created the fuzz tone by punching holes in his amplifiers to produce a dark, grumbling sound. It took off instantly, but it was banned by some deejays in big cities for seeming to suggest teen violence.