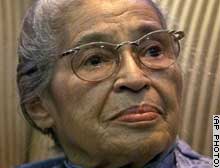 ATLANTA -- Rosa Parks, who helped trigger the civil rights movement in the 1950s, died Monday, her longtime friends told CNN. She was 92. Parks inspired the movement when she refused to give up her bus seat to a white man in Montgomery, Alabama, in December 1955.

"As the mother of the new civil rights movement, [she] has left an impact not just on the nation, but on the world," said U.S. Rep. John Conyers, who met Parks during the early days of the civil rights struggle.

Parks' moment in history began in December 1955 when she refused to give up her seat on a bus to a white man in Montgomery, Alabama.

Her arrest triggered a 381-day boycott of the bus system by blacks that was organized by a 26-year-old Baptist minister, the Rev. Martin Luther King Jr. (See video on an activist's life and times -- 2:52)

The boycott led to a court ruling desegregating public transportation in Montgomery, but it wasn't until the 1964 Civil Rights Act that all public accommodations nationwide were desegregated.

Facing regular threats and having lost her department store job because of her activism, Parks moved from Alabama to Detroit in 1957. She later joined the staff of U.S. Rep. John Conyers, a Michigan Democrat.

Conyers, who first met Parks during the early days of the civil rights struggle, recalled Monday that she worked on his original congressional staff when he first was elected to the House of Representatives in 1964.

"I think that she, as the mother of the new civil rights movement, has left an impact not just on the nation, but on the world," he told CNN in a telephone interview. "She was a real apostle of the nonviolence movement."

He remembered her as someone who never raised her voice -- an eloquent voice of the civil rights movement.

"You treated her with deference because she was so quiet, so serene -- just a very special person," he said, adding that "there was only one" Rosa Parks.

Gregory Reed, a longtime friend and attorney, said Parks died between 7 p.m. and 8 p.m. of natural causes. He called Parks "a lady of great courage."

Parks co-founded the Rosa and Raymond Parks Institute for Self Development to help young people pursue educational opportunities, get them registered to vote and work toward racial peace.

"As long as there is unemployment, war, crime and all things that go to the infliction of man's inhumanity to man, regardless -- there is much to be done, and people need to work together," she once said.

Even into her 80s, she was active on the lecture circuit, speaking at civil rights groups and accepting awards, including the Presidential Medal of Freedom in 1996 and the Congressional Gold Medal in 1999.

"This medal is encouragement for all of us to continue until all have rights," she said at the June 1999 ceremony for the latter medal.

Parks was the subject of the documentary "Mighty Times: The Legacy of Rosa Parks," which received a 2002 Oscar nomination for best documentary short.

In April, Parks and rap duo OutKast settled a lawsuit over the use of her name on a CD released in 1998. (Full story)

She was born Rosa Louise McCauley in Tuskegee, Alabama, on February 4, 1913. Her marriage to Raymond Parks lasted from 1932 until his death in 1977.

Parks' father, James McCauley, was a carpenter, and her mother, Leona Edwards McCauley, a teacher.

Before her arrest in 1955, Parks was active in the voter registration movement and with the National Association for the Advancement of Colored People, where she also worked as a secretary in 1943.

At the time of her arrest, Parks was 42 and on her way home from work as a seamstress.

She took a seat in the front of the black section of a city bus in Montgomery. The bus filled up and the bus driver demanded that she move so a white male passenger could have her seat.

"The driver wanted us to stand up, the four of us. We didn't move at the beginning, but he says, 'Let me have these seats.' And the other three people moved, but I didn't," she once said.

When Parks refused to give up her seat, a police officer arrested her.

As the officer took her away, she recalled that she asked, "Why do you push us around?"

The officer's response: "I don't know, but the law's the law, and you're under arrest."

She added, "I only knew that, as I was being arrested, that it was the very last time that I would ever ride in humiliation of this kind."

That same day, a group of blacks founded the Montgomery Improvement Association and named King, the young pastor of Dexter Avenue Baptist Church, as its leader, and the bus boycott began.

For the next 381 days, blacks -- who according to Time magazine had comprised two-thirds of Montgomery bus riders -- boycotted public transportation to protest Parks' arrest and in turn the city's Jim Crow segregation laws.

The mass movement marked one of the largest and most successful challenges of segregation and helped catapult King to the forefront of the civil rights movement.

The boycott ended on November 13, 1956, after the U.S. Supreme Court upheld a lower court ruling that Montgomery's segregated bus service was unconstitutional.

Parks' act of defiance came one year after the Supreme Court's Brown v. Board of Education decision that led to the end of racial segregation in public schools. (Full story)

U.S. Rep. John Lewis of Georgia, a Democrat, told CNN Monday he watched the 1955-56 Montgomery drama unfold as a teenager and it inspired him to get active in the civil rights movement.

"It was so unbelievable that this woman -- this one woman -- had the courage to take a seat and refuse to get up and give it up to a white gentleman. By sitting down, she was standing up for all Americans," he said.