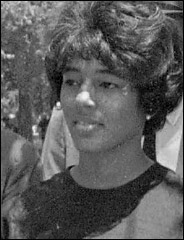 ATLANTA -- Vivian Malone Jones, one of two black students whose effort to enroll at the University of Alabama led to George Wallace's infamous ''stand in the schoolhouse door'' in 1963, died Thursday. She was 63.

Jones, who went on to become the first black to graduate from the school, died at Atlanta Medical Center, where she had been admitted Tuesday after suffering a stroke, said her sister, Sharon Malone.

Jones, a retired federal worker who lived in Atlanta, grew up in Mobile, Ala. She had enrolled at historically black Alabama A&M University in Huntsville when she transferred to the University of Alabama in 1963. The move led to then-Gov. Wallace's infamous stand in defiance of orders to admit black students. Jones and James Hood, accompanied by then-Deputy U.S. Attorney General Nicholas Katzenbach, enrolled after Wallace finished his statement and left.

At an appearance last year in Mobile, she recalled meeting with Wallace in 1996, when the former governor was in frail health. He died in 1998.

She recalled that she and Hood waited in a car until Wallace read his proclamation. Finally, when he stepped aside, she said, that allowed them to enter the university.

''I was never afraid. I did have some apprehensions in my mind, though, especially having gone to segregated, `separate, but equal' schools,'' she said.

Jones said her religious beliefs gave her confidence to persist, and she graduated in 1965.

Hood left after a few months, but returned to receive his doctorate in 1997.

Now a retired educator living in Madison, Wis., Hood said Jones was a quiet person in public, but she always provided encouragement to him during the events at Alabama.

''She was a very determined person, probably more so than I was,'' he said Thursday.

He said the agreement between the White House and Wallace's aides provided that Wallace would step aside. They had already enrolled quietly at the federal courthouse in Birmingham, and all they had to do was pay their fees and leave, he said.

He recalled talking to President Kennedy on the telephone.

''We knew it was going to be historic but we had no idea what the impact would be,'' he said.

After graduating, Jones went on to work for the U.S. Justice Department in Washington and for the Environmental Protection Agency in Atlanta, where she retired, her sister said.

''She had a long career in government,'' Sharon Malone said.

Wallace's son, George Jr., called Jones ''a true American hero'' and said he ''was deeply saddened'' to hear of her death.

University of Alabama President Robert E. Witt paid tribute to Jones on Thursday, saying she ''opened the doors of opportunity for thousands of students. She will be remembered for her courage and grace that inspired young people throughout the world. We pray for strength for her family during this difficult time.''

While Jones was the first black Alabama graduate, she and Hood were not the first to enroll at the school. Autherine Lucy enrolled at Alabama in 1956, but rioting broke out and her stay there was brief.

Her husband died last year. She is survived by a son, a daughter and a grandson.