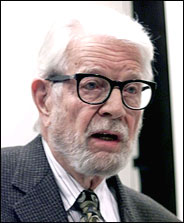 CHICAGO -- Wayne C. Booth, one of the pre-eminent literary critics of the second half of the 20th century, whose lifelong study of the art of rhetoric illuminated the means by which authors seduce, cajole and more than occasionally lie to their readers in the service of narrative, died yesterday morning at his home in Chicago. He was 84.

The cause was complications of dementia, his daughter Katherine Booth Stevens said.

His latest book, a memoir titled "My Many Selves," is scheduled to be published next year by Utah State University Press.

To many earlier critics, notably the New Critics of the mid-20th century, literature was meant to exist in a kind of social vacuum, to be described critically in terms of the text, and only the text. But to Professor Booth, literature was not so much words on paper as it was a complex ethical act. He saw the novel as a kind of compact between author and reader: intimate and rewarding, but rarely easy. At the crux of this compact lay rhetoric, the art of verbal persuasion.

The author's task, he argued, was to draw readers into the web of narrative and hold them there. The critic's task was to tease out the specific rhetorical devices - linguistic, stylistic, symbolic - by which this was accomplished. To describe the intricate, shifting dance between author and reader, he coined a number of critical terms that are now common parlance, among them "implied author" and "unreliable narrator."

Where his early work explored the use of rhetoric in narrative, his later work considered diverse forms of communication, from political discourse to television commercials. In a sense, his books are users' manuals, explaining why these forms work as evocatively as they do.

"He made rhetoric into a way to deal with so many of the problems of the modern world," James Phelan, Humanities Distinguished Professor of English at Ohio State University, said in a telephone interview yesterday. "He took that work, which was really about the ways in which authors communicate to readers, and began to think more broadly about the ways in which people on different sides of ideological divides can communicate with each other."

Wayne Clayson Booth was born on Feb. 22, 1921, in American Fork, Utah. His family was descended from Mormon pioneers, and as a young man he embraced his faith, becoming a missionary in Chicago. But little by little, he began to wrestle with church teachings. It was a struggle, he later said, that informed both his decision to root himself in the secular world and his particular interest in rhetoric.

He earned a bachelor's degree from Brigham Young University in 1944, a master's from the University of Chicago in 1947 and a Ph.D. from Chicago in 1950. During World War II, he was a clerk-typist for the Army infantry, stationed in Paris. After teaching at Haverford and Earlham Colleges, he joined the Chicago faculty in 1962. He retired in 1992.

Besides his daughter, of Northleach, England, he is survived by his wife, the former Phyllis Barnes, whom he married in 1946; another daughter, Alison, a professor of English at the University of Virginia; and three grandchildren. A son, John Richard, died in 1969.

In "The Company We Keep," widely regarded as one of his most significant books, he argued that criticism itself, far from being a detached abstraction, should be an act of ethical judgment.

"Overt ethical appraisal is one legitimate form of literary criticism," he wrote. "Anyone who attempts to invite ethical criticism back into the front parlor, to join more fashionable, less threatening varieties, must know from the beginning that no simple, definitive conclusions lie ahead. I shall not, in my final chapter, arrive at a comfortable double column headed 'Ethically Good' and 'Ethically Bad.' But if the powerful stories we tell each other really matter to us - and even the most skeptical theorists imply by their practice that stories do matter - then a criticism that takes their 'mattering' seriously cannot be ignored."

Not everyone was persuaded by Professor Booth's rhetorical style, which some critics found stiff, even pretentious. But most reviewers were enchanted with his 1999 memoir, "For the Love of It" (University of Chicago), a very personal account of learning to play the cello as an adult.

As the story of Professor Booth's passion for chamber music unfolds, the book becomes an exploration of the idea of amateurism as a form of ethical responsibility. Even its title, which invokes the original, positive, meaning of "amateur," was a carefully considered rhetorical choice. To him, "amateur," like "rhetoric" before it, was a word that simply begged to be rehabilitated.