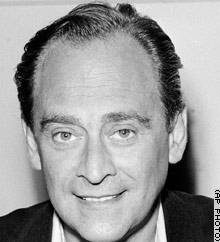 LOS ANGELES -- Comedian Louis Nye, who created a national catchphrase belting out "Hi, ho, Steverino!" as one of the players on Steve Allen's groundbreaking 1950s TV show, has died. He was 92.

Nye died Sunday at his home in Los Angeles after a long battle with lung cancer, his son, Peter Nye, told The Associated Press on Monday.

Nye had worked regularly in nightclubs and on television until just a couple of years ago, his son said. He had a recurring role from 2000 to 2002 in the HBO comedy "Curb Your Enthusiasm" as the father of Jeff Garlin's character.

When he joined Allen's show in 1956 he was already well established as one the era's hippest comics, appearing regularly on radio, in clubs and on early TV shows.

A master of voices and accents, he could go from being droll one moment to prissy the next. He could also switch effortlessly from comically evil Nazis to bumbling Russians.

"He has a great business card from that time that lists something like 15 accents that he could do," his son recalled with a chuckle.

On "The Steve Allen Show," which ran until 1961 under various names, he quickly endeared himself to audiences as Gordon Hathaway, the effete, country-club snob who would welcome Allen's arrival with the "Hi, ho, Steverino!" salutation.

After the show's run ended, Nye appeared often on TV game shows, in films and as a regular on "The Ann Sothern Show." He was often cast as the second banana, never the lead.

Nye teamed with Allen again in 1967, on "The Steve Allen Comedy Hour," a CBS show in which he also portrayed Gordon Hathaway. His cohorts included Allen's wife, Jayne Meadows, Ruth Buzzi and John Byner, among others.

In the summer of 1970 he hosted the variety show "Happy Days" on CBS and three years later co-starred with Norman Fell in the New York garment industry sitcom "Needles and Pins." He played Kirby Baker in the 1978 TV show "Harper Valley P.T.A."

In the 1980s and '90s Nye provided various voices for the "Inspector Gadget" cartoon show.

He also guest starred on such shows as "St. Elsewhere," "The Love Boat," "Laverne & Shirley" and "The Munsters," and appeared frequently as a guest on "The Jackie Gleason Show," "The Tonight Show Starring Johnny Carson" and "The Andy Williams Show."

Nye was born May 1, 1913, in Hartford, Connecticut, where he began his career in theater before moving to New York City to enter radio.

Although the son recalled his father as being "just naturally funny," the elder Nye once told The Associated Press that when he began his career he had aspirations of being a serious actor.

"I still think of myself as an actor," he said in that 1970 interview. "In the radio days I was busy playing rotten Nazis, rich uncles and emotional juveniles -- the whole span -- and the only time I tried to be funny was at parties."