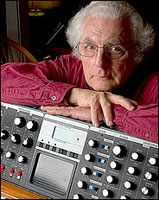 RALEIGH, North Carolina -- Robert A. Moog, whose self-named synthesizers turned electric currents into sound and opened the musical wave that became electronica, has died. He was 71.

Moog died Sunday at his home in Asheville, according to his company's Web site. He had suffered from an inoperable brain tumor, detected in April.

A childhood interest in the theremin, one of the first electronic musical instruments, would lead Moog to a create a career and business that tied the name Moog as tightly to synthesizers as the name Les Paul is to electric guitars.

Despite traveling in circles that included jet-setting rockers, he always considered himself a technician.

"I'm an engineer. I see myself as a toolmaker and the musicians are my customers," he said in 2000. "They use the tools."

As a Ph.D. student in engineering physics at Cornell University, Moog -- rhymes with vogue -- in 1964 developed his first voltage-controlled synthesizer modules with composer Herbert Deutsch. By the end of that year, R.A. Moog Co. marketed the first commercial modular synthesizer.

The instrument allowed musicians, first in a studio and later on stage, to generate a range of sounds that could mimic nature or seem otherworldly by flipping a switch, twisting a dial, or sliding a knob. Other synthesizers were already on the market in 1964, but Moog's stood out for being small, light and versatile.

The arrival of the synthesizer came as just as the Beatles and other musicians started seeking ways to fuse psychedelic-drug experiences with their art. The Beatles used a Moog synthesizer on their 1969 album, "Abbey Road"; a Moog was used to create an eerie sound on the soundtrack to the 1971 film "A Clockwork Orange".

Keyboardist Walter (later Wendy) Carlos demonstrated the range of Moog's synthesizer by recording the hit album "Switched-On Bach" in 1968 using only the new instrument instead of an orchestra.

"Suddenly, there was a whole group of people in the world looking for a new sound in music, and it picked up very quickly," Deutsch, the Hofstra University emeritus music professor who helped develop the Moog prototype, said in a 2000 interview with The Associated Press.

The popularity of the synthesizer and the success of the company named for Moog took off in rock as extended keyboard solos in songs by Manfred Mann, Yes and Pink Floyd became part of the progressive sound of the 1970s.

"The sound defined progressive music as we know it," said Keith Emerson, keyboardist for the rock band Emerson, Lake and Palmer.

Charles Carlini, a New York City concert promoter, staged Moogfest in May 2004 to mark a half-century since Moog founded his first company while still in college. Emerson, Rick Wakeman of Yes, and Bernie Worrell of Parliament/Funkadelic were among those who played, and a second Moogfest was held a year later.

Moog had "this absent-minded professorial way about him," Carlini said.

"He's like an Einstein of music," Carlini said. "He sees it like, there's a thought, an idea in the air, and it passes through him. Passing through him, he's able to build these instruments."

"A lot of people today don't realize what this man brought to the masses," Carlini said. "He brought electronic music to the masses and changed the way we hear music."

But the now-pervasive synthesizer's ability to mimic strings, horns, and percussion has also threatened some musicians.

In 2004, musicians extracted a promise from the Opera Company of Brooklyn to never again use an advanced kind of synthesizer, called a virtual orchestra machine, in future productions.

Born in 1934 in New York City, Moog paid for his studies at Queens College and Columbia University by building and marketing theremins, which are played by passing the hand through and around vibrating radio tubes. Theremins were used create the spooky "eww-woo-woo" sounds on the soundtracks of science fiction films such as "The Day the Earth Stood Still."

He went on to attach his name to a long list of synthesizers developed over the years -- among them Micromoog, Minitmoog, Multimoog and Memorymoog.

Moog, who had set up shop in suburban Buffalo, New York, sold R.A. Moog in 1973 and moved five years later to a remote plot outside Asheville, a scenic Appalachian Mountain city and center for new-age pursuits that Rolling Stone magazine once dubbed "America's new freak capital."

A deliberate man with brushed-back white hair and a breast pocket packed with pens, Moog drove an aging Toyota painted with a snail, vines and a fish blowing bubbles.

"When I drive that thing around, people smile at me," he said. "I really feel I'm enhancing the environment."

He spent the early 1990s as a research professor of music at the University of North Carolina at Asheville before turning full-time to running his new instrument business, which was renamed Moog Music in 2002. The roster of customers includes Nine Inch Nails, Pearl Jam, Beck, Phish, Sonic Youth and Widespread Panic.

A public memorial is scheduled for Wednesday in Asheville.