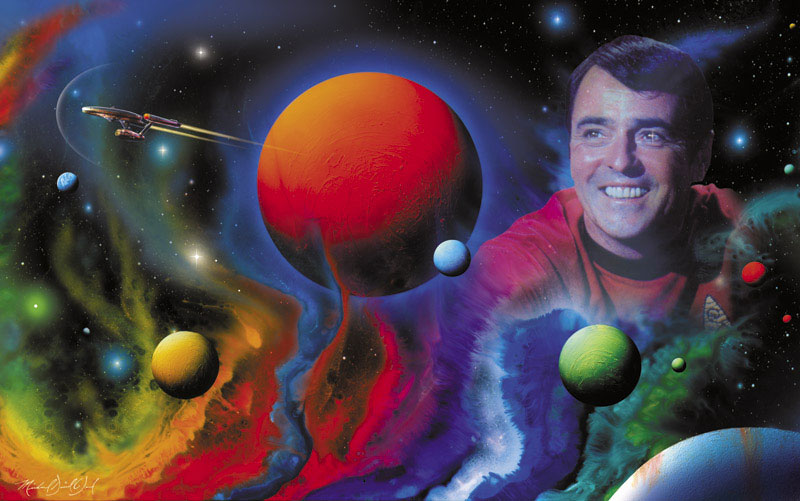 LOS ANGELES, California (AP) -- James Doohan, the burly chief engineer of the Starship Enterprise in the original "Star Trek" TV series and motion pictures who responded to the command "Beam me up, Scotty," died early Wednesday. He was 85.

Doohan died at 5:30 a.m. (1330 GMT) at his Redmond, Washington, home with his wife of 28 years, Wende, at his side, Los Angeles agent and longtime friend Steve Stevens said. The cause of death was pneumonia and Alzheimer's disease, he said.

The Canadian-born Doohan fought in World War II and was wounded during the D-Day invasion, according to the StarTrek.com Web site. He was enjoying a busy career as a character actor when he auditioned for a role as an engineer in a new space adventure on NBC in 1966. A master of dialects from his early years in radio, he tried seven different accents.

"The producers asked me which one I preferred," Doohan recalled 30 years later. "I believed the Scot voice was the most commanding. So I told them, 'If this character is going to be an engineer, you'd better make him a Scotsman.' "

The series, which starred William Shatner as Capt. James T. Kirk and Leonard Nimoy as the enigmatic Mr. Spock, attracted an enthusiastic following of science fiction fans, especially among teenagers and children, but not enough ratings power. NBC canceled it after three seasons.

When the series ended in 1969, Doohan found himself typecast as Montgomery Scott, the canny engineer with a burr in his voice. In 1973, he complained to his dentist, who advised him: "Jimmy, you're going to be Scotty long after you're dead. If I were you, I'd go with the flow."

"I took his advice," said Doohan, "and since then everything's been just lovely."