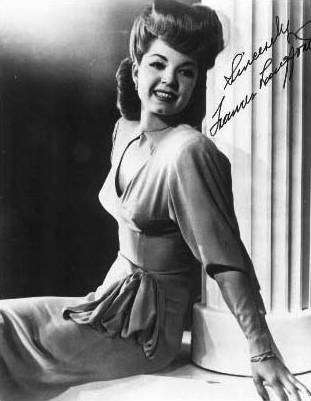 MIAMI -- Frances Langford, whose steamy rendition of "I'm in the Mood for Love" captivated soldiers when she was part of Bob Hope's USO tours during World War II, died Monday at the age of 92. Langford had been ill with congestive heart failure and died at her home in Jensen Beach, said her lawyer, Evans Crary Jr.

Langford, a recording artist, radio star and actress from the 1930s to 1950s, joined Hope's troupe to boost wartime morale at military bases and hospitals in Great Britain, Italy, North Africa and the South Pacific. She also entertained new generations of soldiers in Korea and Vietnam.

Even with her hair swept up in a bandanna, the 5-foot-1 singer was a glamorous vision of home and became known as the "Sweetheart of the Fighting Fronts."

Her trademark was "I'm in the Mood for Love," written for her for the 1935 movie "Every Night at Eight."

Langford appeared in 30 Hollywood movies, including "Broadway Melody," "Yankee Doodle Dandy" and "The Hit Parade." She played herself in her final film, 1954's "The Glenn Miller Story."

She was also known for her role as the insufferable wife, Blanche, opposite Don Ameche on the popular 1940s radio comedy "The Bickersons."

She recalled in interviews decades later that entertaining the troops "was the greatest thing in my life."

"We were there just to do our job, to help make them laugh and be happy if they could," Langford told The Associated Press in January 2002.

"She was a charming person, very warm-hearted," said Crary, who had known her for more than 70 years. "She was very interested in other people and appreciative of their interest in her."

Born in Citrus County in April 1913 and raised in Lakeland, Langford was discovered by bandleader Rudy Vallee when he was in Florida for a performance, and he invited her to be a guest on his radio program.

After a brief stint in the Broadway musical "Here Goes the Bride" in 1931, she moved to Hollywood, where she appeared on Louella Parsons' radio show "Hollywood Hotel" and began to appear in movies.

She was singing on Hope's "Pepsodent Show" when he held his first military program at March Field in Riverside, Calif., in 1941. The response was so positive he continued broadcasting from training bases and asked Langford to join him. Soon there were enough soldiers overseas to bring his variety show to them.

Langford wrote a daily newspaper column, "Purple Heart Diary," about her war experiences and later starred in a movie of the same name.

Her first marriage was to actor Jon Hall, who appeared in films such as "The Hurricane" and "Ali Baba and the Forty Thieves."

After World War II, she was singing in nightclubs when she met outboard motor heir Ralph Evinrude. They married in 1955 and moved to her 400-acre estate in Jensen Beach, 100 miles north of Miami.

The couple built a Polynesian-themed restaurant and marina on the Indian River called the Outrigger Resort. She entertained locals and celebrities, including Hope, until Evinrude died in 1986 and she sold the property.

Langford kept up her pastimes of boating and sport fishing and her collection of mounted tuna, marlin and other fish adorns the wall of the Florida Oceanographic Society's visitor center in nearby Stuart that is named after her.

In 1994, she married Harold Stuart, assistant secretary of the Air Force under Harry Truman. They spent summers on Canada's Georgian Island, traveling from Florida aboard her 110-foot yacht.

She is survived by her husband. She had no children.