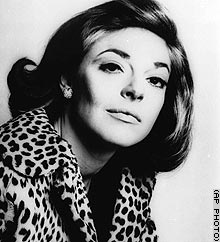 NEW YORK -- Anne Bancroft, who won the 1962 best actress Oscar as the teacher of a young Helen Keller in "The Miracle Worker" but achieved greater fame as the seductive Mrs. Robinson in "The Graduate," has died. She was 73.

She died of uterine cancer on Monday at Mount Sinai Hospital, John Barlow, a spokesman for her husband, Mel Brooks, said Tuesday.

Bancroft was awarded the Tony for creating the role on Broadway of poor-sighted Annie Sullivan, the teacher of the deaf and blind Keller. She repeated her portrayal in the film version.

Yet despite her Academy Award and four other nominations, "The Graduate" overshadowed her other achievements.

Dustin Hoffman delivered the famous line when he realized his girlfriend's mother was coming on to him at her house: "Mrs. Robinson, you're trying to seduce me. Aren't you?"

Bancroft complained to a 2003 interviewer: "I am quite surprised that with all my work, and some of it is very, very good, that nobody talks about `The Miracle Worker.' We're talking about Mrs. Robinson. I understand the world. ... I'm just a little dismayed that people aren't beyond it yet."

Mike Nichols, who directed her in "The Graduate," said she was a masterful actress.

"Her combination of brains, humor, frankness and sense were unlike any other artist," Nichols said in a statement released by a publicist. "Her beauty was constantly shifting with her roles, and because she was a consummate actress she changed radically for every part."

Her beginnings in Hollywood were unimpressive. She was signed by Twentieth Century-Fox in 1952 and given the glamour treatment. She had been acting in television as Anne Marno (her real name: Anna Maria Louise Italiano), but it sounded too ethnic for movies. The studio gave her a choice of names; she picked Bancroft "because it sounded dignified."

Bancroft became known for her willingness to assume a variety of portrayals. She appeared as Winston Churchill's American mother in TV's "Young Winston"; as Golda Meir in "Golda" onstage; a gypsy woman in the film "Love Potion No. 9"; and a centenarian for the TV version of "Oldest Living Confederate Widow Tells All."

After an unhappy three-year marriage to builder Martin May, Bancroft married comedian-director-producer Brooks in 1956. They met when she was rehearsing a musical number, "Married I Can Always Get," for the Perry Como television show, and a voice from offstage called: "I'm Mel Brooks."

In a 1984 interview she said she told her psychiatrist the next day: "Let's speed this process up -- I've met the right man. See, I'd never had so much pleasure being with another human being. I wanted him to enjoy me too. It was that simple." A son, Maximilian, was born in 1972.

Bancroft appeared in three of Brooks' comedies: "Silent Movie," a remake of "To Be or Not to Be" and "Dracula: Dead and Loving It."

She also was the one who suggested that he make a stage musical of his movie "The Producers." She explained that when he was afraid of writing a full-blown musical, including the music, "I sent him to an analyst."

When Bancroft watched Nathan Lane and Matthew Broderick rehearse "The Producers," she realized how much she had missed the theater. In 2002 she returned to Broadway for the first time since 1981, appearing in Edward Albee's "Occupant."

She was born September 17, 1931, in the Bronx to Italian immigrant parents. She recalled scrawling "I want to be an actress" on the back fence of her flat when she was 9. Her father derided her ambitions, saying, "Who are we to dream these dreams?" Her mother was the dreamer, encouraging her daughter in 1958 to enroll at the American Academy for Dramatic Arts.

Live television drama was flourishing in New York in the early 1950s, and Bancroft appeared in 50 shows in two years. "It was the greatest school that one could go to," she said in 1997. "You learn to be concentrated and focused."

In mid-career Bancroft attended the Actors Studio to heighten her understanding of the acting craft. Later she studied at the American Film Institute's Directing Workshop for Women at UCLA. In 1980 she directed a feature, "Fatso," starring Dom DeLuise. It received modest attention.

Despite all her memorable performances, Bancroft was remembered most for Mrs. Robinson. In 2003 she admitted that nearly everyone discouraged her from undertaking the role "because it was all about sex with a younger man." She viewed the character as having unfulfilled dreams and having been relegated to a conventional life with a conventional husband.

She added: "Film critics said I gave a voice to the fear we all have: that we'll reach a certain point in our lives, look around and realize that all the things we said we'd do and become will never come to be -- and that we're ordinary."