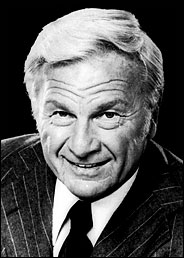 LOS ANGELES -- Eddie Albert, the actor best known as the constantly befuddled city slicker-turned-farmer in television's ''Green Acres,'' has died. He was 99.

Albert, who appeared in movies and television for more than 50 years, died of pneumonia Thursday at his home in the Pacific Palisades area, in the presence of his longtime caregivers and son Edward, family friend Dick Guttman said Friday.

Albert achieved his greatest fame on ''Green Acres'' as Oliver Douglas, a New York lawyer who settles in a farm town with his glamorous wife, played by Eva Gabor, and finds himself perplexed by the antics of a host of rural residents, including a pig named Arnold Ziffel.

He was a tireless conservationist, crusading for endangered species, healthful food, cleanup of Santa Monica Bay pollution and other causes. He had remained healthy even in old age.

''Three days ago he was playing basketball in his wheelchair with his granddaughter,'' Guttman said. ''He stayed very vital.''