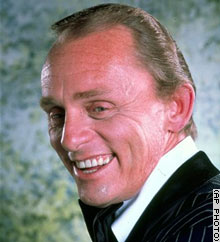 BURBANK, California -- Actor Frank Gorshin, the impressionist with 100 faces best known for his Emmy-nominated role as the Riddler on the old "Batman" television series, has died. He was 72.

BURBANK, California (AP) -- Actor Frank Gorshin, the impressionist with 100 faces best known for his Emmy-nominated role as the Riddler on the old "Batman" television series, has died. He was 72.

Gorshin's wife of 48 years, Christina, was at his side when he died Tuesday at Providence Saint Joseph Medical Center, his agent and longtime friend, Fred Wostbrock, said Wednesday.

"He put up a valiant fight with lung cancer, emphysema and pneumonia," Mrs. Gorshin said in a statement.

Despite dozens of television and movie credits, Gorshin will be forever remembered for his role as the Riddler, Adam West's villainous foil in the question mark-pocked green suit and bowler hat on "Batman" from 1966-69.

"It really was a catalyst for me," Gorshin recalled in a 2002 Associated Press interview. "I was nobody. I had done some guest shots here and there. But after I did that, I became a headliner in Vegas, so I can't put it down."

West said the death of his longtime friend was a big loss.

"Frank will be missed," West said in a statement. "He was a friend and fascinating character."

Gorshin earned another Emmy nomination for a guest shot on "Star Trek."

In 2002, Gorshin portrayed George Burns on Broadway in the one-man show "Say Goodnight Gracie." He used only a little makeup and no prosthetics.