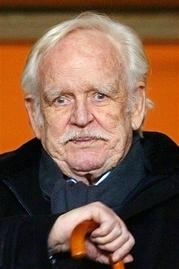 MONACO (AP) -- Prince Rainier III, whose fairy-tale marriage to American film star Grace Kelly brought elegance and glamour to one of Europe's oldest dynasties, died Wednesday, nearly a month after he was hospitalized with a lung infection. He was 81.

Europe's longest-reigning monarch died at 6:35 a.m. at the hospital overlooking Monaco's glittering, yacht-filled harbor where he was being treating for heart, kidney and breathing problems. His body was moved to his hilltop palace where it will in lie in state, the royal palace said.

The Mediterranean enclave's famed Monte Carlo casino closed its doors Wednesday in a sign of respect.

"Each of us feels like an orphan because the principality has been marked by his imprint over the 56 years" of his reign, said Patrick Leclercq, head of government in the principality of 32,000 people.

Prince Albert, 47, Rainier's heir, was at his father's side when he died. Rainier's doctors had called Albert around half an hour beforehand to tell him the end was near, the palace said. Rainier died from the heart, kidney and lung problems that caused his hospitalization, the palace said.

Albert, the only son of Rainier and Princess Grace, becomes Monaco's de facto ruler until a formal investiture ceremony expected after a mourning period. He took over the royal powers - but not the throne - from his father last week after a royal commission decided Rainier was too sick to rule.

The unmarried Albert, who has no children, inherits a French-speaking principality no larger than New York's Central Park but world-renowned for its casinos and the annual Monte Carlo Grand Prix. It's nestled on the Mediterranean Coast between Italy and the French Riviera.

Monaco changed its succession law in 2002 to allow power to pass from a reigning prince who has no descendants to his siblings. Albert has two sisters, Princess Caroline and Princess Stephanie, both of whom have children.

Rainier, who assumed the throne on May 9, 1949, had to endure the tragedy of his famous wife's death and relentless scandals - including international criticism of the principality's tax laws - that plagued the final two decades of his rule.

Recurrent chest infections put him in the hospital on numerous occasions. Most recently, he was hospitalized March 7. He was placed in intensive care two weeks later with heart and kidney failure and connected to a respirator.

Tributes flooded in from around Europe. French President Jacques Chirac hailed the prince's "courage and tenacity" in the face of his failing health. German President Horst Koehler said he "fulfilled his duties as head of state with remarkable willpower until the end."

Britain's Queen Elizabeth II sent a message of condolence to the family. Rainier's death means the queen, who acceded to the throne in 1952, becomes the longest-serving monarch in Europe.

Odette Sainsaulieu, a 66-year-old Monegasque retiree, came to the hospital because she wanted to see his body and his family. "I came to say a final goodbye," said Sainsaulieu.

She and other residents wondered whether what they see as a five-decade golden era under Rainier would survive him.

"It was a life, a way of living, of managing the principality," she said.

Under Rainier's leadership, the Mediterranean enclave partially shed its image as "a sunny place for shady people" and became a hub for the high-tech pharmaceutical and cosmetics industries. Rainier was known as the "builder prince" for his many infrastructure projects, and he increased the size of his territory by 20 percent with land reclamation.

"I am like the head of a company," he once said of his role in transforming Monaco.

In 1993, Monaco gained the political recognition Rainier sought for his principality with its entry into the United Nations.

But it was his April 18, 1956, marriage to Hollywood heartbreaker Grace Kelly that put Monaco on the world stage and defined the golden age of his reign. For many, her death in a car accident on Sept. 14, 1982, signaled the end of Monaco's halcyon days.

"She was always present and ready to do things either with me or for me if I couldn't do them," Rainier said of his late wife in a 1983 interview. "Let's say the change is that we worked as a team and the team has been split up."

Rainier Grimaldi was the 30th descendant of Otto Canella, who founded the house of Grimaldi that has ruled Monaco since 1297. Born May 31, 1923, the son of a princess born out of wedlock, Rainier was heir to a family with a stormy past - a harbinger of the scandals to come.

The marriage of his great-grandfather Prince Albert to Lady Mary Douglas Hamilton was dissolved in 1880. Albert's son, Prince Louis II, had a youthful romance with a French girl in Algeria that produced Princess Charlotte, Rainier's mother.

In 1920, Charlotte married Rainier's father, Prince Pierre de Polignac. Rainier was born in 1923 and his parents divorced soon after.

Educated in England, Switzerland and France, Rainier undertook military service near the end of World War II. He became Monaco's ruler at age 26 when his grandfather died in 1949.

As a youth, Rainier had a long romance with French actress Gisele Pascal, became a keen fan of jazz and studied oceanography, later helping to finance Jacques Cousteau's Oceanographic Institute in Monaco. He also developed a love of fast cars.

He met Kelly in 1955 when he was 31 and she was the 25-year-old star attraction of the Cannes Film Festival. Kelly already had an Oscar from the 1954 film "The Country Girl," one of only 11 movies she made.

In January 1956, they announced their engagement and were married in April. Ten months later they had the first of their three children, Caroline. Albert's birth came the following year, on March 14. Stephanie was born Feb. 1, 1965.

Over the years, Rainier worked to consolidate his authority and expand Monaco's economic base as a tax haven for international millionaires who gambled at the territory's swanky casino.

New luxury hotels, towering high-rises and some of the world's most expensive real estate now hug Monaco's coastline. Gambling receipts account for only 3 percent of the revenues of the principality.

Rainier also won battles with France to keep his principality's ban on personal income tax and with Greek shipping tycoon Aristotle Onassis for control of the company that operates Monaco's gambling operations and most of its luxury hotels.

Princess Caroline's rocky first marriage ended in 1980, and her second husband was killed in a boating accident in 1990. Her third husband, German prince Ernst August of Hanover, was ordered to pay more than $440,000 in 2001 for yelling at an editor of a newspaper that reported he had urinated in public.

Princess Stephanie was known for her tempestuous affairs. She had two children by a former bodyguard, then married him in 1995. The marriage lasted 18 months, ending after he was photographed cavorting poolside with a Belgian stripper.

She had a third child in 1998 and refused to reveal the name of the father. She later had a much-publicized romance with the director of the Swiss national circus.

Even Rainier's fairy-tale marriage to Kelly was a target.

A 1994 biography of Princess Grace claimed that the marriage had gone sour and that Rainier's "neglect" forced her to find solace in alcohol and younger men.