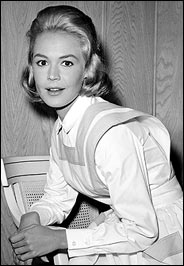 Dodd Darin, the son of the late singer Bobby Darin and Sandra Dee, said his mother died at 6 a.m. (9 a.m. ET) in Los Robles Hospital & Medical Center in Thousand Oaks, California, where she had been treated for 14 days for complications from kidney disease and pneumonia.

Dee was born Alexandra Zuck in Bayonne, New Jersey. Her mother often lied about her age to help her get ahead in work and school, according to the Web site Internet Movie Database.

Work as a model by age 12 led to television commercials and, at age 14, a role in the movie "Until They Sailed," which was released in 1957, the site said.

The next year she was signed to "The Reluctant Debutante" and "The Restless Years."

In 1959, the teenage heartthrob won roles in five productions. "Gidget" and "A Summer Place" proved the most popular.

In 1960, she appeared in "Portrait in Black" and married Darin.

In rapid succession came roles in "Come September," "Romanoff and Juliet," "Tammy Tell Me True" and its 1963 sequel, "Tammy and the Doctor."

But the latter films fared poorly and the offers began to wane.

Her movie career was largely finished by the time she was 26, according to the Web site's biography.

In 1970, Sandra won a role in "The Dunwich Horror" and, during that decade, made four television movies.

As her star diminished, she battled anorexia, alcoholism and depression, the Web site says.

Dee was diagnosed with throat cancer and kidney failure in 2000. She is survived by her son and two granddaughters, Alexa and Olivia, according to the Web site.

She was portrayed by actress Kate Bosworth last year in "Beyond the Sea," which starred Kevin Spacey as Bobby Darin.