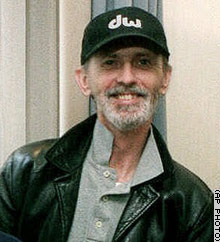 SAN FRANCISCO -- Keith Knudsen, the longtime Doobie Brothers drummer who was part of the band during a string of hits that included "Taking it to the Streets" and "Black Water," died of pneumonia Tuesday. He was 56.

Knudsen had been hospitalized for more than a month, according to the band's longtime manager Bruce Cohn.

"I just saw him Sunday, just before the Super Bowl," Cohn said. "He was in good spirits. He was weak, but he was OK."

Knudsen began drumming in eighth grade and joined the Doobie Brothers in 1974. "After a week's rehearsal, I went on the road with the band," Knudsen said in his biography on the band's Web site.

The Doobies were known for incorporating gospel and jazz stylings into popular hit songs. They also were well-regarded for their live performances. Their other hits included "China Grove" and "Jesus is Just Alright."

Knudsen played with the Doobies until the band's 1982 farewell tour. During the band's hiatus, Knudsen and bandmate John McFee formed the country rock group Southern Pacific, which released four albums and had several hits.

Knudsen, who lived in Sonoma County's wine country, had cancer in 1995, Johnston said.

"It left him weak and I don't think he ever fully regained all his strength," Johnston said.

He said the band is performing about 100 concerts a year and is scheduled to release a new album this summer.