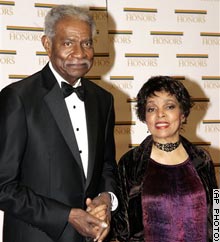 NEW YORK -- Ossie Davis, the actor distinguished for roles dealing with racial injustice on stage, screen and in real life, has died, an aide said Friday. He was 87.

Davis, the longtime husband and partner of actress Ruby Dee, was found dead Friday in his hotel room in Miami Beach, Florida, according to officials there. He was making a film called "Retirement," said Arminda Thomas, who works in his office in suburban New Rochelle and confirmed the death.

Davis, who wrote, acted, directed and produced for the theater and Hollywood, was a central figure among black performers of the last five decades. He and Dee celebrated their 50th wedding anniversary in 1998 with the publication of a dual autobiography, "In This Life Together."

In Miami Beach, police spokesman Bobby Hernandez said Davis' grandson called the police shortly before 7 a.m. when his grandfather would not open the door to his room at the Shore Club Hotel. Davis was found dead and there does not appear to be any foul play, Hernandez said.

"I'm shocked," Livingston said. "I'm absolutely shocked. He was the most wonderful man I've ever known. Such a classy, kindly man." His wife had gone to New Zealand to make a movie there, Livingston said.

Their partnership called to mind other performing couples, such as the Lunts, or Hume Cronyn and Jessica Tandy. Davis and Dee first appeared together in the plays "Jeb," in 1946, and "Anna Lucasta," in 1946-47. Davis' first film, "No Way Out" in 1950, was Dee's fifth.

Both had key roles in the television series "Roots: The Next Generation" (1978), "Martin Luther King: The Dream and the Drum" (1986) and "The Stand" (1994). Davis appeared in several Spike Lee films, including "School Daze," "Do the Right Thing" and "Jungle Fever," some with Dee.

In 2004, Davis and Dee were among the artists selected to receive the Kennedy Center Honors.

When not on stage or on camera, Davis and Dee were deeply involved in civil rights issues and efforts to promote the cause of blacks in the entertainment industry. They nearly ran afoul of the anti-Communist witch-hunts of the early 1950s, but were never openly accused of any wrongdoing.

Davis, the oldest of five children of a self-taught railroad builder and herb doctor, was born in tiny Cogdell, Georgia, in 1917 and grew up in nearby Waycross and Valdosta. He left home in 1935, hitchhiking to Washington to enter Howard University, where he studied drama, intending to be a playwright.

His career as an actor began in 1939 with the Rose McClendon Players in Harlem, then the center of black culture in America. There, the young Davis met or mingled with some of the most influential figures of the time, including the preacher Father Divine, W.E.B. DuBois, A. Philip Randolph, Langston Hughes and Richard Wright.

He also had what he described in the book as a "flirtation with the Young Communist League," which he said essentially ended with the onset of World War II. Davis spent nearly four years in service, mainly as a surgical technician in an Army hospital in Liberia, serving both wounded troops and local inhabitants.

Back in New York in 1946, Davis debuted on Broadway in "Jeb," a play about a returning soldier. His co-star was Dee, whose budding stage career had paralleled his own. They had even appeared in different productions of the same play, "On Strivers Row," in 1940.

In December 1948, on a day off from rehearsals from another play, "The Smile of the World," Davis and Dee took a bus to New Jersey to get married. They already were so close that "it felt almost like an appointment we finally got around to keeping," Dee wrote in "In This Life Together."

As black performers, they found themselves caught up in the social unrest fomented by the then-new Cold War and the growing debate over social and racial justice in the United States.

"We young ones in the theater, trying to fathom even as we followed, were pulled this way and that by the swirling currents of these new dimensions of the Struggle," Davis wrote in the joint autobiography.

He lined up with black socialist reformer DuBois and singer Paul Robeson, remaining fiercely loyal to the singer even after Robeson was denounced by other black political, sports and show business figures for his openly communist and pro-Soviet sympathies.

While Hollywood and, to a lesser extent, the New York theater world became engulfed in McCarthyism and red-baiting controversies, Davis and Dee emerged from the anti-communist fervor unscathed and, in Davis' view, justifiably so.

"We've never been, to our knowledge, guilty of anything -- other than being black -- that might upset anybody," he wrote.

They were friends with baseball star Jackie Robinson and his wife, Rachel -- Dee played her, opposite Robinson himself, in the 1950 movie, "The Jackie Robinson Story" -- and with Malcolm X.

In the book, Davis told how a prior commitment caused them to miss the Harlem rally where Malcolm was assassinated in 1965. Davis delivered the eulogy at Malcolm's funeral, and reprised it in a voice-over for the 1992 Spike Lee film, "Malcolm X."

Along with film, stage and television, the couple's careers extended to a radio show, "The Ossie Davis and Ruby Dee Story Hour," that ran on 65 stations for four years in the mid-1970s, featuring a mix of black themes.

Both wrote plays and screenplays, and Davis directed several films, most notably "Cotton Comes to Harlem" (1970) and "Countdown at Kusini" (1976), in which he also appeared with Dee.

Both Davis and Dee made numerous guest appearances on television shows.