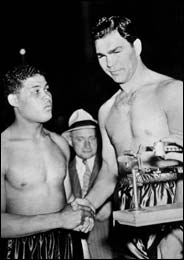 BERLIN -- Max Schmeling, the heavyweight champion whose two fights with Joe Louis set off a propaganda war between the Nazi regime and the United States on the eve of World War II, died at 99.

Schmeling, one of Germany's biggest sports idols, died Wednesday at his home in Hollenstedt, his foundation in Hamburg said. The boxer was buried Friday next to his wife, Anny Ondra, in Hollenstedt at a private ceremony attended by a small circle of friends, the foundation added.

``He was a star, but he didn't let fame get into his head,'' Chancellor Gerhard Schroeder said.

German President Horst Koehler, on a state visit to Israel, lauded Schmeling as a ``great example in sport'' and for ``his humanity.''

Schmeling's extraordinary career will be remembered for his bouts with Louis, which produced a lasting bond between the boxers despite a politically charged atmosphere when they fought.

Born Sept. 28, 1905 of humble origins in a small town in the state of Brandenburg, Schmeling became interested in boxing after seeing a film about the sport.

He became the first German -- and European -- heavyweight world champion when he beat Jack Sharkey in New York on June 12, 1930 after the American was disqualified for a fourth-round low blow. He was the only German to be world heavyweight champion.

Schmeling lost his title to Sharkey two years later on a disputed decision, but came back to knock out the previously unbeaten Louis in the 12th round on June 19, 1936, which the Nazi regime trumpeted as a sign of ``Aryan supremacy.''

Schmeling was a 10-1 underdog and his victory is considered one of the biggest upsets in boxing history. But in a rematch at Yankee Stadium on June 22, 1938, Louis knocked out Schmeling in the first round.

At first, Schmeling was popular in the United States. But by the time the rematch took place, he was viewed as a symbol of the Nazis. The fight was portrayed in both countries as good vs. evil. The Nazis sought to project Schmeling as an Aryan Superman. President Franklin D. Roosevelt invited Louis to the White House to exhort the black boxer to beat Schmeling.

Louis, then the champion, sent the German challenger to the canvas four times and knocked him out in 2 minutes, 4 seconds of the first round.

``Looking back, I'm almost happy I lost that fight,'' Schmeling said in 1975. ``Just imagine if I would have come back to Germany with a victory. I had nothing to do with the Nazis, but they would have given me a medal. After the war I might have been considered a war criminal.''

After the loss, the Nazis distanced themselves from Schmeling. In 1940, he was drafted into the military as a parachutist. A year later, he was severely injured and hospitalized for months.

Despite the picture of him in the United States as a tool of the Nazis, Schmeling had run-ins with the regime even before the first Louis fight.

Although he had lunched with Hitler and had long discussions with his propaganda minister Joseph Goebbels, Schmeling angered the Nazi bosses in 1935 by refusing to join the Nazi party, fire his Jewish-American manager, Joe Jacobs, and divorce Ondra, a Czech-born film star.

During the 1936 Berlin Olympics, Schmeling extracted a promise from Hitler that all U.S. athletes would be protected. He hid two Jewish boys in his Berlin apartment during Kristallnacht (the night of broken glass) in 1938, when the Nazis burned books in a central square and rampaged through the city, setting synagogues on fire. He reportedly used his influence to save Jewish friends from concentration camps.

After the war, Schmeling was nearly destitute and fought five more times for the money. He retired after a 10-round loss to Walter Neusel in 1948 at 43 with a record of 56-10-4 with 39 knockouts.

Schmeling used the money from the bouts to buy the license to the Coca-Cola franchise in Germany and grew wealthy in the postwar era. He also marketed his name, retaining his huge popularity in Germany despite his problems with the Nazis.

Over the years, Schmeling treasured his friendship with Louis and quietly gave the down-and-out American gifts of money. He also paid for Louis' funeral in 1981.

In his final years, Schmeling spent three or four hours a day watching television in his home in Hollenstedt. He remained married to Ondra for 54 years until she died in 1987. The two, who met on the set of a film in which Schmeling appeared, married in 1932. The couple had no children.

``I had a happy marriage and a nice wife,'' Schmeling said in 1985. ``I accomplished everything you can. What more can you want?''