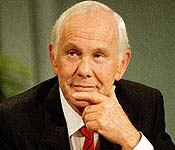 LOS ANGELES -- Johnny Carson, the "Tonight Show" TV host who served America a smooth nightcap of celebrity banter, droll comedy and heartland charm for 30 years, has died. He was 79.

"Mr. Carson passed away peacefully early Sunday morning," his nephew, Jeff Sotzing, told The Associated Press. "He was surrounded by his family, whose loss will be immeasurable. There will be no memorial service."

Sotzing would not give further details, including the time of death or the location.

The boyish-looking Nebraska native with the disarming grin, who survived every attempt to topple him from his late-night talk show throne, was a star who managed never to distance himself from his audience.