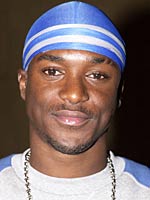 LOS ANGELES -- Lamont Bentley, who was a regular in the 1990s sitcom "Moesha" and appeared frequently in television and movies, was killed in a car crash, his manager said Wednesday.

Bentley died Tuesday night when his vehicle plunged off the San Diego Freeway, manager Susan Ferris said. He was the only person in the vehicle.

Bentley had appeared in a number of films, including "The Wash" and "Tales From the Hood." He also played Tupac Shakur in the TV movie, "Too Legit: The MC Hammer Story," and had appeared in guest roles on "The Parkers," "NYPD Blue" and "Clueless."

The Milwaukee native and father of two daughters began his career after moving to Los Angeles with his mother, an aspiring singer.

"This is a big year for him," Ferris said.

"We were very excited because he was coming into his own. It's like a candle being snuffed right out."