'All My Children' actress Warrick dies at 88 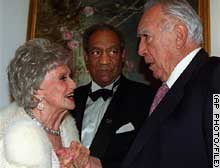 NEW YORK -- Ruth Warrick, the darling of the daytime soap opera "All My Children" who launched her career in Orson Welles' classic "Citizen Kane," has died, ABC-TV said Monday. She was 88.

In "All My Children," which debuted in 1970, Warrick played Phoebe Tyler Wallingford, the grande dame of the fictitious affluent town of Pine Valley. She portrayed the meddlesome and over-the-top personality so believably that her fans often had trouble distinguishing between the stylish actress and her fictitious, equally sophisticated character.

Twice nominated for an Emmy for the role, Warrick often talked about how Phoebe Tyler had become an integral part of her life.

The producer Jorn Winther once said of the actress: "Obviously Ruth and Phoebe are separate and unique, yet they have much in common. All I can say with confidence is that they are both great ladies and that I love them."

Warrick received the Lifetime Achievement Award from the National Academy of Television Arts and Sciences for the role. She made her final appearance less than two weeks ago to commemorate the show's 35th anniversary.

Susan Lucci, who plays Erica Kane on "All My Children," said Warrick was her first mentor.

"Over the years she not only shared with me her talent and grace, but she did so with the entire country," Lucci said in the ABC statement.

Born and raised in St. Joseph, Missouri, Warrick left for New York after graduating from the University of Kansas City. Her interest in acting led her to the Mercury Theater troupe, headed by Welles.

She made her Hollywood debut in 1941 in "Citizen Kane" as Emily Norton Kane. Welles, who co-wrote, directed and starred in the film, hand-picked her for the role of his wife because he said there were no "ladies in Hollywood" who fit the bill.

In 1991, Warrick was honored with a caricature on the wall of the famous New York restaurant Sardi's in honor of the 50th anniversary of her performance in the film.

Warrick later appeared in other movies, including "The Corsican Brothers," with Douglas Fairbanks Jr., and "The Great Bank Robbery."

But television turned out to be her medium. Before landing the role of Phoebe Tyler, Warrick had the starring role in the series "Father of the Bride" and received an Emmy nomination for her role as Hannah Cord in the long-running "Peyton Place." She also appeared in two other soap operas: "As the World Turns," from 1956-60, and "The Guiding Light," from 1953-54.

Warrick seemed to find her niche in the role of Phoebe Tyler. She often said it was Welles who was indirectly responsible for the character's development.

In her autobiography "The Confessions of Phoebe Tyler," Warrick wrote that Kane's wife almost seemed to mature into the soap opera character.

"Since Emily's character owes much to the compelling hand of Orson Welles, so, indirectly, must Phoebe's," she wrote.

Warrick also had a strong commitment to the arts in education. She taught at Julia Richman High School in New York as part of former President Carter's City in Schools program and was a dropout prevention consultant for the Labor Department under former President Kennedy and for former President Johnson's Job Training Corps.

She is survived by three children, a grandson and six great-grandchildren.