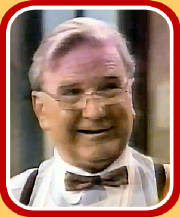 Gerard Parkes, the Irish-Canadian character actor best known for playing two very different “Docs” in The Boondock Saints and Jim Henson’s show Fraggle Rock, died Sunday in a Toronto retirement home just days after his birthday, his agent confirmed to EW. He was 90.

The Dublin-born Parkes relocated to Canada in the ’50s to pursue a career in entertainment, where he would transition in and out of television, film, theater and radio across his 50-plus-year career. He appeared in a number of Canadian productions including The Forest Rangers and The Littlest Hobo, but for kids of a certain generation, Parkes will always be Doc, the lovable bespectacled inventor and sidekick to Sprocket in the North American version of Jim Henson’s muppet series Fraggle Rock, which ran from 1983 to 1987. He’d go on to reprise that role in ABC’s 1987 special A Muppet Family Christmas.

Parkes’ gentle gruffness was on display in a variety of roles throughout the next few decades, which found him playing priests fairly often (Short Circuit 2, Mother Night, It Takes Two, and Trapped in Paradise, to name just a few). He also famously played the Tourette-afflicted bar owner in The Boondock Saints and its sequel.

Though the span of his work was more than just Doc the inventor, his longtime agent Gerry Jordon told CBC News that Parkes would “love” being remembered for his Fraggle Rock role. “He had a thrill doing that show,” he said. “He was a magical man and a terrific performer.”