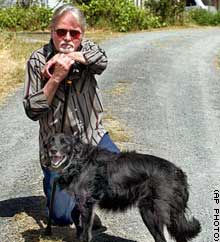 PETALUMA, California -- Spencer Dryden, drummer for the Jefferson Airplane in the rock band's glory years, including the breakthrough 1967 album "Surrealistic Pillow" and the Woodstock festival, has died of cancer. He was 66.

Dryden, who died at his home Monday, retired from performing 10 years ago but hadn't been working much before that. "I'm gone," he told the San Francisco Chronicle last May. "I'm out of it. I've left the building."

A benefit concert last year raised $36,000 for Dryden, who was facing hip replacement and heart surgery at the time and whose home had been destroyed by fire. He was diagnosed with cancer later last year.

"Spencer had a flow, a way of going, an impulse power that was irresistible and unique," the Grateful Dead's Mickey Hart told the Chronicle in the obituary published Thursday. "He was capable of creating a churning, loving rhythm machine for ecstatic dancing."

Dryden was inducted in the Rock and Roll Hall of Fame in 1996 for his work with the Jefferson Airplane.

He joined the band in 1966. He had been working as a strip club drummer when he was recommended as the replacement for Skip Spence, who went on to start another noted rock group, Moby Grape.

Dryden recorded on a number of the Airplane's most famous albums, "Surrealistic Pillow," which included the hits "Somebody to Love" and "White Rabbit"; "After Bathing At Baxter's"; the live "Bless Its Pointed Little Head"; "Crown Of Creation"; and "Volunteers."

During his stint with the Airplane, Dryden had an affair with lead singer Grace Slick.

In the '70s and '80s, he played for the Grateful Dead sideline country-rock band, New Riders of the Purple Sage, and a Bay area group of psychedelic rock veterans called the Dinosaurs.

Dryden was married three times and is survived by three sons. His father, British actor Wheeler Dryden, was a half brother of Charlie Chaplin.