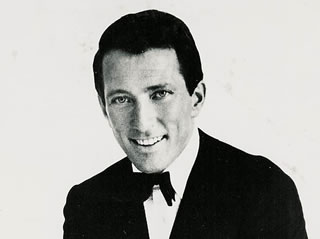 Andy Williams, whose corn-fed good looks, easygoing charm and smooth rendition of "Moon River" propelled him to the heights of music stardom in the early '60s, died Tuesday at his home in Branson, Mo., his family announced.

He was 84, and 2012 had marked his 75th year in showbiz. Williams is survived by his wife Debbie and his three children, Robert, Noelle and Christian.

With 17 gold and three platinum records to his name, Williams enjoyed his golden years playing golf and dividing his time between La Quinta, Calif., and Branson, where he appeared at his Andy Williams Moon River Theater since 1992.

It was on the stage of that theater, in November 2011, Williams announced he had bladder cancer. At the time, he assured fans the disease was no longer a death sentence and that he had every intention of being a survivor.

Born in Wall Lake, Iowa, the son of a railroad worker, Howard Andrew WIlliams sang in his family's church choir with older siblings Bob, Dick and Don. In the late '30s, the boys built up a name for themselves regionally on Midwestern radio stations as the Williams Brothers quartet.

After the war, in 1947, they joined entertainer Kay Thompson in her innovative and sophisticated nightclub act. In his 2009 memoir Moon River and Me, Williams admitted he had a long affair with Thompson, who had been a legendary vocal coach at MGM (she taught Judy Garland and Lena Horne to sing for the screen) and was 18 years the senior of her handsome young protégé.

In 1952, when the brothers' act broke up, Andy launched his solo career, only to find himself broke and without bookings. Giving himself one last shot, he wisely switched his repertoire from clever Noël Coward ditties to the latest pop hits, and his New York club appearances soon included singing spots on the Tonight show (which was in Manhattan at the time), then regular TV shots and a Columbia Records contract.

By the early '60s he had an easy-listening hit under his belt, "Can't Get Used to Losing You," though it was his romantic take on the Best Song Oscar winner from 1961's Breakfast at Tiffany's, "Moon River," that landed him on the map – and kept him there.

The smash hit recording led to NBC's 1962 launch of The Andy Williams Show, which remained on the air until 1971 and then returned as an annual Christmas special. It was on the variety weekly program in 1963 that Williams introduced to America a group of young singing siblings from Utah, The Osmond Brothers.

Despite his own clean-cut good looks – the Williams signature look was a turtleneck under a brightly colored pullover sweater – scandal did touch Williams's life. In the mid-1970s, his ex-wife, French dancer Claudine Longet, went on trial in Aspen for the fatal shooting of her lover, international skiing star Vladimir ("Spider") Sabich.

In the end, Longet, who claimed the shooting was an accident, was found guilty of misdemeanor criminal negligence and received only a 30-day sentence, which she served on and off at her convenience. In his 2009 memoir, Williams, who during the trial had accompanied his ex-wife to the courtroom on a daily basis, continued to defend her innocence.

Longet and Williams were married from 1961 to 1975 and had three children together: Noelle, Christian, and Robert. They survive him, as does his second wife (since 1991), Debbie Williams.