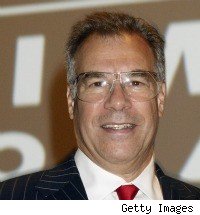 The football world says goodbye to a legend of the sport on Tuesday. Steve Sabol, President of NFL Films, has died just weeks away from 70th birthday after an 18 month battle with brain cancer.

Sabol took over the mantle of NFL Films President in 1985 from his father Ed, who founded the company. Steve learned in March of 2011 that he had a brain tumor that can't be removed. He introduced his father during Ed's emotional enshrinement into the Pro Football Hall of Fame in August of 2011. Sabol is survived by his wife, Penny, his son Casey, his parents Audrey and Ed, and his sister Blair.

"Steve was the creative genius behind NFL Films' remarkable work," NFL Commissioner Roger Goodell said Tuesday in an email to NFL personnel. "Steve's passion for football was matched only by his talent and energy. He was a major contributor to the success of the NFL, a man who changed the way we looked at football and sports, and a great friend. His legacy is assured.

"Steve was an incredible visionary. He spent 50 years at the NFL and changed the way we see pro football. So when you're watching the games this week, it's worth remembering just how much Steve contributed to the way we think, see, and love our game."

Generations of NFL fans learned to love the game of football through the lens of Ed and Steve Sabol. Steve started out as a cameraman for the company before eventually running the company.

"We all realized pretty quickly that Steve was the force behind what we were doing here," the NFL Films' head of cinematography Hank McElwee head of cinematography said this year. "The pictures. Big Ed had the idea and he sold the owners on it, but when it came to the actual vision of this company, without a doubt it was Steve. Steve saw things in a unique way that every network is copying right now."

Steve Sabol won over 40 Emmy awards and oversaw 107 Emmys for NFL Films. He was the Sporting News 2002' "Sports Executive of the Year." He was awarded the Lifetime Achievement Award in 2003. The company broke ground as the first to wire players and coaches for sound. It revolutionized how music was used with sports films. It was the first to use ground-level slow motion and montage editing in sports. So much of what we see in sports television came directly from the Sabols. He straddled the line between artist and executive.

NFL Films was a family company in the truest sense. That's why it feels like the NFL is losing a member of its family today. Sabol and his father spent their lives glorifying the game.

"My dad has a great expression," Sabol said when his father's induction was announced. "Tell me a fact, and I'll learn. Tell me a truth and I'll believe. But tell me a story and it will live in my heart forever. And now my Dad's story will be in Canton and hopefully that will live forever too."

The story of the NFL can't be told without Steve Sabol. May he rest in peace.

The family has requested that any donations be sent to the Jefferson Foundation for Brain Tumor Research, c/o Lindsey Walker, 925 Chestnut Street, Suite 110, Philadelphia, PA 19107.