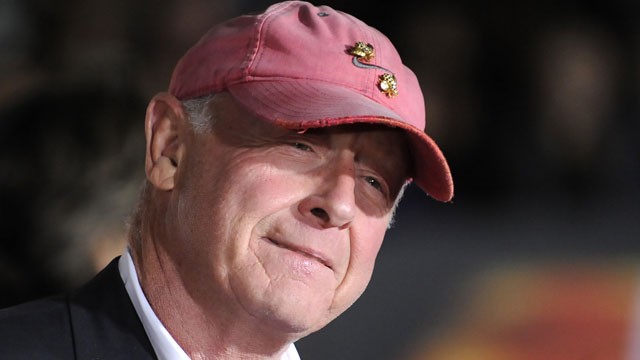 Tony Scott, director of Top Gun and Crimson Tide, has died after jumping from a bridge in Los Angeles, authorities said

The film director Tony Scott has jumped to his death from a suspension bridge over Los Angeles harbour, shocking Hollywood.

Police found a list of contact details in his car, a black Toyota Prius, which was parked on one of the bridge's eastbound lanes, a coastguard spokesman, Lieutenant Jennifer Osburn, said. A suicide note was later found in Scott's office.

Several witnesses reportedly saw Scott climb a fence on the south side
of the bridge's apex. He "jumped without hesitation", said official sources quoted in the Daily Breeze.

The Los Angeles police department, California highway patrol, firefighters and the coastguard conducted a search, while cargo vessels slowed during their passage through the main channel so as to minimise disturbance.

Sonar equipment helped divers locate and recover the body around 4.30pm. It was taken to a dock in Wilmington. A county coroner confirmed the identity later on Sunday evening.

The news bewildered Hollywood. Scott, the younger brother of Ridley, also a director and his production partner, had made big-budget features and worked with A-list stars over a long career.

Rarely seen without his trademark red baseball cap, he had collaborated with Denzel Washington, Tom Cruise, Bruce Willis, Brad Pitt, Will Smith, Robert De Niro and Gene Hackman, among others, in action movies and thrillers. Hits included The Taking of Pelham 123, Man on Fire, The Last Boy Scout, Enemy of the State and True Romance.

One of Scott's most recent productions, made with his brother, was Coma, a four-hour medical thriller due for release next month on A&E.

There was no immediate explanation for why Scott, who grew up by the river Tyne in northern England and followed Ridley into advertising then film, should have taken his own life.

Tributes immediately flowed on Twitter. "No more Tony Scott movies. Tragic day," tweeted the director Ron Howard. "RIP Tony Scott. So sad to hear this," said the documentary-maker Morgan Spurlock. "We are absolutely devastated by the passing of director Tony Scott. He will be truly missed," said a statement from Tribeca Film.

Film director Duncan Jones, who directed Moon and Source Code, tweeted: "Just heard about Tony Scott news. Horrible ... Tony was a truly lovely man who took me under his wing & ignited my passion to make films." Jones added: "Awww Tony. Wish you had felt there was a way to keep going. What a sad waste. My thoughts go out to his wife and beautiful children."

Scott was married to Donna Scott, who had starred alongside Tom Cruise in Scott's 1990 film Days of Thunder. The couple had twin boys, Frank and Max.

The director, whose full name was Anthony David Scott, lived in Beverly Hills, about 30 miles north from Long Island and the Vincent Thomas bridge.