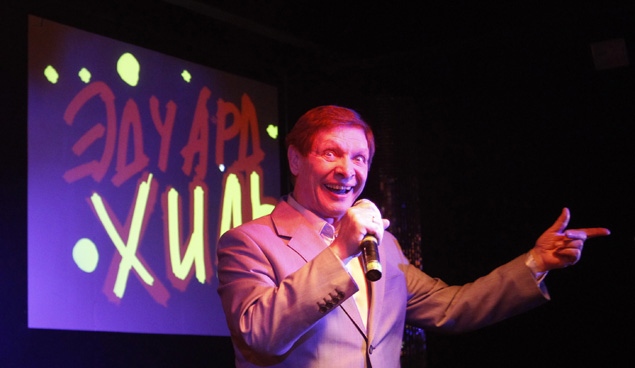 Little-known Russian crooner Eduard Khil, who gained international fame when a 1976 clip of him performing on Soviet television went viral in 2010, has died, The Associated Press reported on Monday.

He had been hospitalized in St. Petersburg since a stroke in early April that left him with severe brain damage, according to AP. He died Monday.

Khil was a popular singer in the Soviet Union during the 1960s and 70s, but after the fall of the Iron Curtain, he slipped into obscurity.

It wasn't until two years ago when the video of his performance ignited on YouTube, scoring more than two million views.

The boy replied: “‘Grandpa, you’re home drinking tea here, [and] in the meantime, everyone’s singing your song on the Internet.’”

The tune he belted out, “I Am Glad, ‘Cause I’m Finally Returning Back Home,” was originally written at the height of the Cold War in 1966 with lyrics about an American cowboy.

Khil and his composer knew the highly restrictive government would never allow him to sing it.

Instead, they decided to ditch the words, and Khil simply sang the melody.

The lack of lyrics is “why it has such a rich orchestral arrangement,” Khil said. “I think that’s been the secret of its success.”

Like most viral videos, the clip popped up everywhere, and was comedically edited together with footage from TV shows such as “Star Trek” and “Lost.” It also lead Khil to gain the nickname, “Mr. Trololo,” which is based on the sounds he sings in the video.