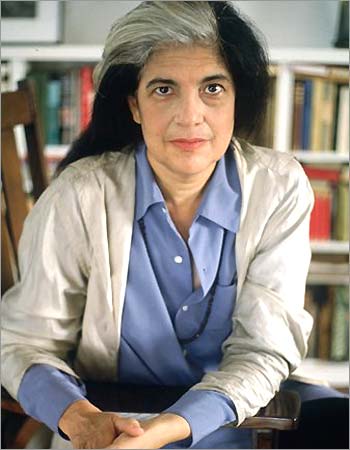 NEW YORK -- Susan Sontag, the author, activist and self-defined "zealot of seriousness" whose voracious mind and provocative prose made her a leading intellectual of the past half century, died Tuesday. She was 71.

NEW YORK (AP) -- Susan Sontag, the author, activist and self-defined "zealot of seriousness" whose voracious mind and provocative prose made her a leading intellectual of the past half century, died Tuesday. She was 71.

The hospital declined to release a cause of death. Sontag had been treated for breast cancer in the 1970s.

Sontag called herself a "besotted aesthete," an "obsessed moralist" and a "zealot of seriousness." Tall and commanding, her very presence suggested grand, passionate drama: eyes the richest brown; thick, black hair accented by a bolt of white; the voice deep and assured; her expression a severe stare or a wry smile, as if amused by a joke only she could tell.

She wrote a best-selling historical novel, "The Volcano Lover," and in 2000 won the National Book Award for the historical novel "In America." But her greatest literary impact was as an essayist.

The 1964 piece "Notes on Camp," which established her as a major new writer, popularized the "so bad it's good" attitude toward popular culture, applicable to everything from "Swan Lake" to feather boas. In "Against Interpretation," this most analytical of writers worried that critical analysis interfered with art's "incantatory, magical" power.

She also wrote such influential works as "Illness as Metaphor," in which she examined how disease had been alternately romanticized and demonized, and "On Photography," in which she argued pictures sometimes distance viewers from the subject matter. "On Photography" received a National Book Critics Circle award in 1978. "Regarding the Pain of Others," a partial refutation of "On Photography," was an NBCC finalist in 2004.

She read authors from all over the world and is credited with introducing such European intellectuals as Roland Barthes and Elias Canetti to American readers.

"I know of no other intellectual who is so clear-minded with a capacity to link, to connect, to relate," Carlos Fuentes, the Mexican novelist, once said. "She is unique."

Unlike many American writers, she was deeply involved in politics, even after the 1960s. From 1987-89, Sontag served as president of American chapter of the writers organization PEN. When the Ayatollah Ruhollah Khomeini called for Salman Rushdie's death because of the alleged blasphemy of "The Satanic Verses," she helped lead protests in the literary community.

Sontag campaigned relentlessly for human rights and throughout the 1990s traveled to the region of Yugoslavia, calling for international action against the growing civil war. In 1993, she visited Sarajevo and staged a production of "Waiting for Godot."

The daughter of a fur trader, she was born Susan Rosenblatt in New York in 1933, and also spent her early years in Tucson, Arizona, and Los Angeles. Her mother was an alcoholic; her father died when she was 5. Her mother later married an Army officer, Capt. Nathan Sontag.

Susan Sontag remembered her childhood as "one long prison sentence." She skipped three grades and graduated from high school at 15; the principal told her she was wasting her time there. Her mother, meanwhile, warned if she did not stop reading she would never marry.

Her mother was wrong. At the University of Chicago, she attended a lecture by Philip Rieff, a social psychologist and historian. They were married 10 days later. She was 17, he 28. "He was passionate, he was bookish, he was pure," she later said of him.

By the mid-1960s, she and Rieff were divorced (they had a son, David, born in 1952), and Sontag had emerged in New York's literary society. She was known for her essays, but also wrote fiction, although not so successfully at first. "Death Kit" and "The Benefactor" were experimental novels few found worth getting through.

"Unfortunately, Miss Sontag's intelligence is still greater than her talent," Gore Vidal wrote in a 1967 review of "Death Kit."

"Yet ... once she has freed herself of literature, she will have the power to make it, and there are not many American writers one can say that of."

Her fiction became more accessible. She wrote an acclaimed short story about AIDS, "The Way We Live Now," and a best-selling novel, "The Volcano Lover," about Lord Nelson and his mistress Lady Hamilton.

In 2000, her novel "In America," about the 19th-century Polish actress Helena Modjeska, was a commercial disappointment and was criticized for the uncredited use of material from fiction and nonfiction sources. Nonetheless, Sontag won the National Book Award.

Sontag's work also included making the films "Duet For Cannibals" and "Brother Carl" and writing the play "Alice in Bed," based on the life of Alice James, the ailing sister of Henry and William James. Sontag appeared as herself in Woody Allen's mock documentary, "Zelig."

In 1999 she wrote an essay for "Women," a compilation of portraits by her longtime companion, photographer Annie Leibovitz.

Sontag did not practice the art of restrained discourse. Writing in the 1960s about the Vietnam War she declared "the white race is the cancer of human history." Days after the September 11, 2001, terrorist attacks, she criticized U.S. foreign policy and offered backhanded praise for the hijackers.

"Where is the acknowledgment that this was not a 'cowardly' attack on 'civilization' or 'liberty' or 'humanity' or 'the free world' but an attack on the world's self-proclaimed superpower, undertaken as a consequence of specific American alliances and actions?" she wrote in The New Yorker.

"In the matter of courage (a morally neutral virtue): whatever may be said of the perpetrators of Tuesday's slaughter, they were not cowards."

Even among sympathetic souls, she found reason to contend. At a 1998 dinner, she was one of three given a Writers For Writers Award for contributions to others in the field. Sontag spoke after fellow guest of honor E.L. Doctorow, who urged writers to treat each other as "colleagues" and worried about the isolation of what he called "print culture."

"I agree with Mr. Doctorow that we are all colleagues, but there are perhaps too many of us," Sontag stated.

"Nobody has to be a writer. Print culture may be under siege, but there has been an enormous inflation in the number of books printed, and very few of these could be considered part of literature. ... Unlike what has been said here before, for me the primary obligation is human solidarity."