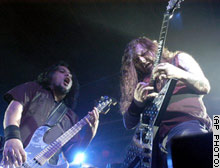 COLUMBUS, Ohio -- A gunman stormed the stage during a heavy metal concert in Columbus, Ohio, on Wednesday night, firing at the band and audience and killing four people before a police officer shot and killed him, according to police.

One of the dead was guitarist "Dimebag" Darrell Abbott. The gunman also wounded two people.

Before the gunman was shot, police said, he grabbed a hostage and fired into the crowd. It was not clear what happened to the hostage.

The attack came shortly after the band, Damageplan, began its performance at the Alrosa Villa nightclub on Columbus' north end.

One of the wounded is in critical condition, and the other is hospitalized with non-life-threatening injuries, police said. Two others were injured in the incident and treated at the scene, although the nature of their injuries was not clear.

According to witnesses, the gunman initially shot the band's guitarist, Dimebag Darrell.

Darrell, 38, and his brother, Vinnie Paul, 40, formed Damageplan after Pantera -- a group they formed in the 1980s -- broke up last year. Their father is Jerry Abbott, a country and western songwriter and producer.

Police were notified of the shooting around 10:18 p.m., Mull said. A uniformed police officer who was near the scene slipped into the venue from a back entrance, confronted the gunman during the rampage and killed him.

"If not for the officer who showed up, there would have been more dead," Mull said.

Police roped off a huge area of the nightclub's parking lot, as 60 detectives questioned hundreds of witnesses. Police brought in buses to keep the witnesses warm as they waited to be questioned.

Calvin Bota said he saw the shooting from the mosh pit right in front of the stage, shortly after the band began playing.

"Somebody came -- I don't know where they came from, out of the audience or whatnot -- but they come onto (the) stage and ... he shot the guitarist at first, fired a couple of other shots and then he hid behind the stage a little bit," Bota told CNN affiliate WSYX.

"Everybody started scattering, you know, there's mayhem everywhere. And then a police officer came into the building, you know, came in professional with his gun raised and then he proceeded to shoot the guy."

"I was up close to the stage and I just saw some guy run up on the side of the stage and I heard some shots and I saw (drummer) Vinnie (Paul) fall and somebody jumped on top of Vinnie, and the guy just stayed around the stage and started shooting other people," Caudill said.

"I saw wounded people all over the place, out in the parking lot, inside," he said. "It just didn't sound like gunshots or anything, it didn't occur to me that something like that was happening."