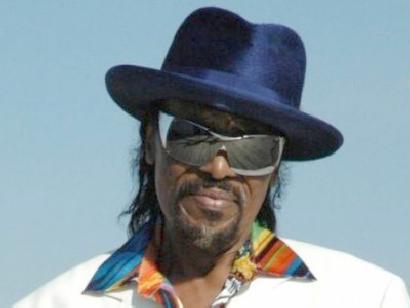 Chuck Brown, known as the "Godfather of Go-Go," a genre blending funk, jazz and soul and other musical forms, died Wednesday, his manager said.

Funk fans started each Chuck Brown concert with a chant, "Wind me up, Chuck."

From there they would be treated to guitar riffs, driving percussion and other rhythm instruments that left them dancing to the beat.

Brown, who died Wednesday at 75, was the "Godfather of Go-Go," a genre blending funk, jazz and soul and other musical forms.

"Go-Go," 40 years after its founding, remains especially popular in its hometown of Washington, D.C.

"The groove and vibe he created was unparalleled," said manager Tom Goldfogle. "All of his performances were a journey with the audience."

Brown engaged in a call-and-response dialogue with fans, ensuring their interaction with each set.

He last performed in early March and had been hospitalized for about four weeks.

With the Soul Searchers, Brown had a big hit in the 1970s with "Bustin' Loose."

The guitarist and singer was a familiar figure on stage with his brim hat and sunglasses, creating "the beat" for dancers.

"Go-Go" referred to a sound continuing from one song to the next.

"Chuck would describe it as nonstop percussive bass music with its roots in Latin, African and funk," said Goldfogle. "He added his blues and jazz elements."

While Brown performed worldwide, his most loyal fan base was in Washington.

District of Columbia Mayor Vincent Gray, in a tweet, paid tribute to the gravel-voiced Brown. "What a loss," his message concluded.

Brown competed with disco and later had an influence on local hip-hop artists, Goldfogle told CNN.

In 2010, Brown received his first Grammy nomination, in collaboration with Jill Scott and Marcus Miller, for "Love." A 2007 album, "We're About the Business," included the singles "Block Party" and Chuck Baby."

Brown, according to his manager, played to several generations.

"His music is loved as much by the grandmother, as the mother, or the daughter," Goldfogle said.

According to CNN affiliate WJLA, Brown had recently postponed numerous shows due to failing health.

"His family continues to be grateful for the outpouring of love and support and requests respect for their privacy during this difficult time," Goldfogle said in a statement.