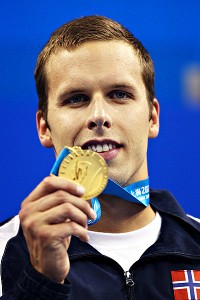 STOCKHOLM -- Alexander Dale Oen stood on top of a world championship podium less than a year ago, wiping away tears as the Norwegian national anthem played in triumph, just three days after his country was rocked by a massacre by a right-wing extremist.

The swimmer became a symbol of resilience and resurgence in Norway with that victory, the country's first swimming world title at a time when it was in desperate need of something to cheer for.

On Tuesday, Norway was in mourning after Dale Oen died suddenly from cardiac arrest during a pre-Olympic training camp in Flagstaff, Ariz. He was 26.

Dale Oen, one of Norway's biggest medal hopes for the London Olympics, was found collapsed on his bathroom floor late Monday and was pronounced dead shortly afterward at Flagstaff Medical Center, Norwegian swimming federation president Per Rune Eknes confirmed to The Associated Press. He said it was still unclear what led to the cardiac arrest.

"We're all in shock," Norway coach Petter Loevberg said in a statement released by the federation. "This is an out-of-the-body experience for the whole team over here. Our thoughts primarily go to his family who have lost Alexander way too early."

Hospital spokeswoman Starla Collins confirmed the death, but did not provide further details. The Flagstaff Police Department said it was conducting "a thorough investigation into the cause of death," but that there were no signs of trauma or foul play. An autopsy will be performed by the Coconino County Medical examiner's office, and the department did not know when the results would be released.

Dale Oen won the 100-meter breaststroke at last year's world championships in Shanghai, three days after a bombing and shooting spree by Anders Breivik killed 77 people back home in Norway -- including children at a summer camp.

Dale Oen dedicated the win to the victims of that massacre, pointing to the Norwegian flag on his cap after the finish to send a message to his countrymen back home.

"We need to stay united," he said after the race. "Everyone back home now is of course paralyzed with what happened, but it was important for me to symbolize that even though I'm here in China, I'm able to feel the same emotions."

FINA, the world governing body of swimming, lauded "his courage in Shanghai when shining in the pool immediately after the sad events that had taken place in Norway."

"He had given to media and fans an image of a brave and sincere athlete, paying a heartfelt tribute to his compatriots from the pool deck in China," FINA said. "His example had been one of the most vivid moments of those championships."

His death dominated the news in Norway on Tuesday, and Prime Minister Jens Stoltenberg said on Twitter that "Alexander Dale Oen was a great sportsman for a small country. My thoughts go to his family and friends."

The Norwegian team was holding a camp at elevation in Flagstaff before the Olympics, and the federation said Dale Oen had gone through only a light training session Monday and also played some golf that day. But teammates became worried when the swimmer spent an unusually long time in the shower and entered his bathroom when he failed to respond to their knocks on the door.

"Everything was done according to procedure, and we tried everything, so it is immensely sad that we were not able to resuscitate him," Roensen said. "It is hard to accept."

In his last tweet Monday, Dale Oen said he was looking forward to going back home: "2 days left of our camp up here in Flagstaff, then it's back to the most beautiful city in Norway.. #Bergen."

Dale Oen was born in Bergen, Norway's second largest city, on May 21, 1985. He was the second son of Mona Lillian Dale and Ingolf Oen.

He started swimming at age 4 and said on his website that the sport "came very easy and natural for me." He won silver in the 100 breaststroke at the 2008 Beijing Olympics.

He is the second high-profile athlete to die from cardiac arrest recently, after Italian soccer player Piermario Morosini collapsed on the field during a Serie B game for Livorno last month. That incident came just a month after Bolton midfielder Fabrice Muamba also collapsed during a game but survived.

Dale Oen is the second prominent swimmer to die in less than two years.

American open-water star Fran Crippen died during an October 2010 race in the United Arab Emirates. His autopsy listed the cause of death as drowning combined with heat exhaustion, leading to calls for improved safety measures in that swimming discipline, which involves grueling events that are usually held in oceans and lakes.

"We will figure something out, because he was a great champion," said Marculescu, adding that he had not yet spoken with FINA's medical commission. "We have to find out more details about what happened first."

Dale Oen was considered the leading challenger to Japanese star Kosuke Kitajima, who will be going for his third straight sweep of the 100 and 200 breaststroke events in London.

"In shock over the passing of a dear friend and great rival. RIP Alex," Kitajima tweeted.

"You see a kid in his prime and never think anything like that could happen," Hansen told The Associated Press in a telephone interview. "All of a sudden, they're gone. You can't help but feel sad. It looks so unfair. We're supposed to be these amazing athletes. It's just a shame."

Hansen said he still remembered the look on Dale Oen's face before they raced at the Beijing Olympics.

"The ready room can be stressful and tense, but he was just kind of enjoying it -- laughing and smiling," Hansen said. "You could tell he was just like a little kid excited to race. I knew he loved it."