Levon Helm, Drummer and Singer of the Band, Dead at 71 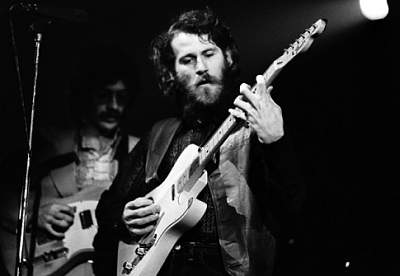 Levon Helm, singer and drummer for the Band, died on April 19th in New York of throat cancer. He was 71.

"He passed away peacefully at 1:30 this afternoon surrounded by his friends and bandmates," Helm's longtime guitarist Larry Campbell tells Rolling Stone. "All his friends were there, and it seemed like Levon was waiting for them. Ten minutes after they left we sat there and he just faded away. He did it with dignity. It was even two days ago they thought it would happen within hours, but he held on. It seems like he was Levon up to the end, doing it the way he wanted to do it. He loved us, we loved him."

In the late Nineties, Helm – whose singing anchored Band classics like "The Night They Drove Old Dixie Down," "Up on Cripple Creek," "Rag Mama Rag," and "The Weight" – was diagnosed with throat cancer and underwent 28 radiation treatments, eventually recovering his voice. In recent weeks, however, Helm had canceled a number of shows, including one at the New Orleans Jazz Fest on April 27th and another in Montclair, New Jersey. A note posted to his website on Tuesday from his daughter Amy and wife Sandy said that Helm was in the "final stages of his battle with cancer. Please send your prayers and love to him as he makes his way through this part of his journey. Thank you fans and music lovers who have made his life so filled with joy and celebration...he has loved nothing more than to play, to fill the room up with music, lay down the back beat, and make the people dance! He did it every time he took the stage."

Born May 26, 1940 in Arkansas, Helm was literally a witness to the birth of rock & roll; as a teenager, he saw Elvis Presley, Little Richard, Johnny Cash and Jerry Lee Lewis in concert and was inspired to play drums after seeing Lewis' drummer, Jimmy Van Eaton. (Helm went on to play mandolin and other stringed instruments as well). In 1960, Helm joined the backup band of rockabilly wildman Ronnie Hawkins – a group that would eventually include Robbie Robertson, Richard Manuel, Rick Danko and Garth Hudson, all future members of the Band.

The musicians broke from Hawkins to form their own group – their names included the Crackers and Levon and the Hawks – but it was their association with Bob Dylan that cemented their reputation. After Dylan saw the group in a club (either in Canada or New Jersey, depending on the source), he invited Helm and guitarist Robertson to join his electric band. "Bob Dylan was unknown to us," Helm wrote in his 1993 memoir This Wheel's on Fire. "I knew he was a folksinger and songwriter whose hero was Woody Guthrie. And that's it." Robertson and Helm were in Dylan's electric band for his controversial, frequently booed show at New York's Forest Hills Tennis Stadium. Afterward, various members of the Band played on Dylan's Blonde on Blonde and toured with him in 1966. (Helm left temporary in 1965, tired of the ongoing hostility from Dylan's folk fans.)

Recuperating in Woodstock after his 1966 motorcycle accident, Dylan again hooked up with the band that would soon be the Band. Before Helm rejoined them, they recorded the landmark Basement Tapes, and the Band's crackling, homespun take on American roots music began to take shape. Rechristening themselves the Band, they signed to Capitol Records and released two classic albums, Music From Big Pink (1968) and The Band (1969). Although Robertson was the Band's principal songwriter, it was Helm's beautifully gruff and ornery voice that brought the Canadian Robertson's mythic Americana songs to life. He was also one of rock's earliest singing drummers.

In 1976, at Robertson's urging, the Band broke up after its farewell concert, known as "The Last Waltz." In meetings before the concert and as recounted in This Wheel's on Fire, Helm was adamantly opposed to the group disbanding. "I didn't want any part of it," he wrote. "I didn't want to break up the band." He begrudgingly went along, but his relationship with Robertson was never the same. After the show, Helm formed his own band, Levon Helm and the RCO All Stars, featuring fellow legends Dr. John, Steve Cropper, and Booker T. Jones, and recorded several solo albums. Helm also ventured into acting with an acclaimed role in 1980's Coal Miner's Daughter, playing Loretta Lynn (Sissy Spacek's) father. But he couldn't leave the Band behind, and with Danko, Manuel, and Hudson, he formed a new version of the Band in the early Eighties, recording three new studio albums with them.

The Band continued for a while after Manuel's suicide by hanging in 1986, but Danko's death in 1999 of heart failure ended the Band once and for all. By then, Helm was dealing with throat cancer. After his recovery, he began holding intimate concerts in his combination barn and studio in Woodstock, called the "Midnight Ramble," in part to pay his medical bills. The low-key, woodsy performances became must-see shows and attracted a rock who's who; Elvis Costello, Natalie Merchant, the Grateful Dead's Phil Lesh and Donald Fagen were among the many who joined Helm and his band. The Ramble shows led to two acclaimed Helm solo albums – one of which, 2007's Dirt Farmer, won a Grammy in the Best Traditional Folk category. "This go-round has been a lot more fun," Helm told Rolling Stone in 2009. "Now I know I've got enough voice to do it."

When the Band was inducted into the Rock and Roll Hall of Fame in 2004, Helm didn't attend, revealing that his feud with Robertson was still on. "I thought Levon was going to show," Robertson told Rolling Stone a few years later. "Then that evening they said he changed his mind and wasn't going to come. And I thought, 'Oh, God, it would have been better if he was here.'"

Helm's throat cancer had taken a toll on his singing voice. On stage and in recent interviews, his voice was sometimes strong but other times was reduced to a low rasp. But at one his last shows, in Ann Arbor on March 19th with a 13-piece band, the audience roared when he sang the Band classic "Ophelia." "I'm not the poster boy of good health," he said in an interview last year. "But I'm not doing too bad. I still got the energy to make music. As long as I can do that, I'm great."