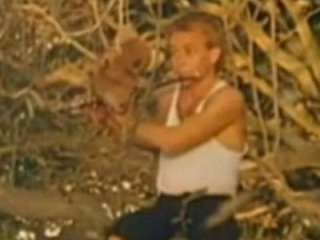 Men at Work member Greg Ham, best known for playing the iconic flute solo on the Australian group's 1982 hit "Down Under," was found dead in his Melbourne home on Thursday (April 19) at the age of 58.

According to the Associated Press, in keeping with local customs, Victoria state police would not confirm any details of the death or whether the musician died of suspicious circumstances. His body was discovered after two friends who had not heard from Ham for a while went to check on him.

"There are a number of unexplained aspects to it which has caused our attendance here today, and we're assisting the local detectives to determine what has occurred," Detective Senior Sergeant Shane O'Connell told reporters.

Though Men at Work enjoyed global success in the early 1980s with their #1 album Business As Usual, which contained the hits "Who Can It Be Now" and "Down Under," they came under scrutiny in 2009 when a publishing company claimed that keyboardist/saxophonist/flutist Ham's solo was lifted from a beloved children's campfire song, "Kookaburra Sits in the Old Gum Tree." The company sued, and in 2010, a judge ruled that the band had copied the melody  and that it should pay 5 percent of past profits.

The song was written by Men at Work singer Colin Hay in 1978, a year before Ham joined the band and added the solo, which court documents said he'd suggested in order to give the tune some "Australian flavor." CNN reported that Ham testified that he'd head the song while growing up in the 1950s and was "pretty sure" the Kookaburra tune was in his school's songbook. Though Hay said he wasn't aware of the original until much later, the AP reported that the controversy had weighed heavily on Ham, who was worried it would mar his musical legacy.

"It has destroyed so much of my song," he told an Australian paper after the 2010 ruling. "It will be the way the song is remembered, and I hate that. I'm terribly disappointed that that's the way I'm going to be remembered — for copying something."

Despite his fears, "Down Under" remains the unofficial anthem for Australia and came in fourth in a 2001 music-industry survey of the best Australian songs. Men at Work broke up in 1985, and Ham had been working as a guitar teacher in recent years.