Thomas Kinkade, one of nation's most popular painters, dies suddenly in Los Gato 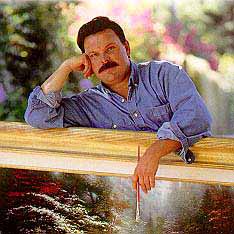 Thomas Kinkade, the "Painter of Light" and one of the most popular artists in America, died suddenly Friday at his Los Gatos home. He was 54.

His family said in a statement that his death appeared to be from natural causes.

"Thom provided a wonderful life for his family," his wife, Nanette, said in a statement. "We are shocked and saddened by his death."

His paintings are hanging in an estimated one of every 20 homes in the United States. Fans cite the warm, familiar feeling of his mass-produced works of art, while it has become fashionable for art critics to dismiss his pieces as tacky. In any event, his prints of idyllic cottages and bucolic garden gates helped establish a brand -- famed for their painted highlights -- not commonly seen in the art world.

"I'm a warrior for light," Kinkade told the Mercury News in 2002, alluding not just to his technical skill at creating light on canvas but to the medieval practice of using light to symbolize the divine. "With whatever talent and resources I have, I'm trying to bring light to penetrate the darkness many people feel."

His Media Arts Group company surged to success, taking in $32 million per quarter from 4,500 dealers across the country 10 years ago, before it went private in the middle of the past decade. The cost of his paintings range from hundreds of dollars to more than $10,000.

The Placerville native, who also leaves behind a brother and sister, was known to dress
up like Santa Claus on Christmas, ride a Harley-Davidson and go on painting trips around the world. He would visit studio executives but also got to know all the homeless people in Los Gatos. He read classic books but also enjoyed shooting and blowing up things on his ranch.

The father of four girls and a devoted Christian, his artistic philosophy was not to express himself through his paintings like many artists, but rather to give the masses what they wanted: warm, positive images, said Ken Raasch, a longtime friend who co-founded Kinkade's company with him.

"I'd see a tree as being green, and he would see it as 47 different shades of green," Raasch said. "He just saw the world in a much more detailed way than anyone I've ever seen."

In the 25 years since graduating from UC Berkeley, his official biography says he has printed 1,000 paintings of "cabin and nature scenes, beautiful gardens, classic cottages, sports, inspirational content, lighthouses and powerful seascapes, impressionists, and classic Americana."

Kinkade became a speaker and author, with books that reached the New York Times Best Seller list. His top sellers include, "Masterworks of Light," and "The Artist's Guide to Sketching." He put Los Gatos High on canvas along with other community landmarks.

He was involved in a charity foundation. As a philanthropist, he contributed and helped raise millions of dollars that went to nonprofit agencies such as the Salvation Army and museums.

But in 2010, the company's Morgan Hill manufacturing arm, Pacific Metro, filed for Chapter 11 bankruptcy protection. Months later, Kinkade was reportedly arrested on suspicion of DUI. In 2009, the Los Angeles Times reported the FBI was investigating whether he fraudulently induced investors and then ruined them financially.

His family was traveling to Australia on Friday and unavailable for further comment. Further details were expected in the coming days.

Authorities would not have the official cause of death for at least a few days. Police referred comment to the coroner, who was unavailable late Friday. Friends and family on Friday began planning a private service and were weighing a public celebration for a later date.

Despite Kinkade's death, his paintings will live on.

"Art is forever," Kinkade told "60 Minutes" in 2007. "It goes front and center on your wall, where everyday the rest of your life you see that image. And it is shaping your children, it's shaping your life."