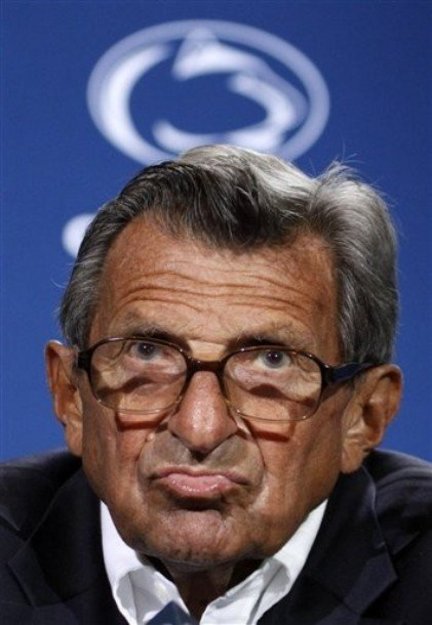 His family released a statement early Sunday morning to announce his death, the Associated Press reported.

Paterno's family, which includes his wife, Sue, five children, and 17 grandchildren, were summoned on Saturday afternoon to the hospital, where Paterno had been under care since being readmitted on Jan. 13.

NBC News reported that continued chemotherapy treatments had created complications for Paterno that resulted in his going back into the hospital eight days ago.

Paterno's lung cancer was disclosed by his family on Nov. 18, nine days after he was fired by the university's board of trustees in the wake of the child sexual-abuse scandal that was revealed following the indictment on Nov. 5 of former Paterno assistant Jerry Sandusky.

At the time, the family called it a "treatable" form of lung cancer. But after Paterno suffered a broken pelvis in a fall at his home, he was admitted to the hospital Dec. 11 to make it easier for him to receive chemotherapy and radiation. He originally had injured his pelvis early in preseason practice in August when he was run into by wide receiver Devon Smith.

He was released from the hospital Dec. 18 but returned Jan. 13, right after he completed an interview with Sally Jenkins of the Washington Post. The interview, which was published Jan. 14, contained his first public comments since the scandal and his firing as head coach.

While in the hospital the first time, a family friend said the cancer treatments "were really taking a lot out of him." Jay Paterno said prior to Penn State's appearance in the TicketCity Bowl that his father had his "good days and bad," but added: "He's a fighter, and he's fighting this."

Word of Paterno's grave condition resulted in hundreds of people - students, alumni, and the curious - turning out at the Paterno statue outside Beaver Stadium on Saturday. Five students dug snow out from around the statue, allowing people to gather with candles or to place flowers at the base of the statue.

One football player, offensive tackle Eric Shrive, put a Penn State hat at the base.

Football players, thousands of whom made their way through Penn State since Paterno came to the campus as an assistant coach in 1950, made their thoughts known about their former coach.

"When I committed to Penn State, the #1 thing you said is that I will get my degree," tweeted defensive end Eric Latimore, a Philadelphia native. "Look what you did."

Paterno became the winningest head coach in Division I football history on Oct. 29, when the Nittany Lions defeated Illinois for his 409th victory. It would be the last of the 548 games he served as Penn State's head coach, covering almost 46 full seasons.

Paterno's firing generated a storm of outrage from former players and other alumni.

The trustees decided that Paterno did not go far enough after being informed in 2002 by assistant coach Mike McQueary, then a graduate assistant, that he had witnessed Sandusky in the shower with a young boy allegedly committing a sexual act. Paterno said he reported it to his superior, athletic director Tim Curley, who is awaiting trial on perjury charges.

Alumni meeting with university president Rodney Erickson during a series of meetings in Pittsburgh, King of Prussia, and New York this month complained that Paterno never got a chance to air his side of the story before being fired.

However, others felt the trustees were justified in firing Paterno, that he should have done more to have Sandusky arrested, and that he had become too powerful at Penn State and too insulated from the university within the football program.

About 12 hours before the trustees fired him, Paterno earlier on Nov. 9 angered his critics by announcing his retirement effective at the end of the season. In his statement, he said: "The board of trustees should not spend a single minute discussing my status."

He also said in the statement he was "absolutely devastated by the developments in this case" and that he grieved and prayed for the victims and their families.

"I have come to work every day for the last 61 years with one clear goal in mind: to serve the best interests of this university and the young men who have been entrusted to my care," he continued.

He concluded by saying, "This is a tragedy. It is one of the great sorrows of my life. With the benefit of hindsight, I wish I had done more."