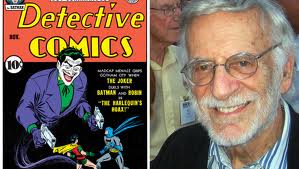 Los Angeles (CNN) -- Cartoonist Jerry Robinson, who worked on the earliest Batman comics and claimed credit for creating the super-villain The Joker, died Thursday at the age of 89, his family confirmed.

Spider-man co-creator Stan Lee, who was with rival Marvel Comics, called him "a genuine talent and a genuine gentleman."

"Jerry Robinson was not only one of the finest artists ever to illustrate comic books, but he was also the head of an editorial syndicate which made cartoons available worldwide, as well as being an inspiration to young artists, whom he always found time to help and advise," Lee said.

Robinson, in a panel discussion at New York Comic Con in 2009, said he was a 17-year-old creative writing student at Columbia University when he was hired as a writer and illustrator at DC Comics.

Though he was initially just assisting Batman creators Bob Kane and Bill Finger, his chance to create The Joker came in 1940, when the demand for more Batman stories overloaded Finger.

"This was going to be a problem, so I volunteered to do one of the stories," Robinson said.

He handed in the work for a grade in his college creative writing class, he said.

"I wanted a very strong villain, because I thought that's going to carry the story," Robinson said. "Villains are more exciting."

He wanted his villain to have a sense of humor, and "in a space of hours" one night "somehow The Joker came out," Robinson said. The first Joker image was modeled out of the joker card in a deck of playing cards, he said.

"It's extraordinary what's happened over the years," he said. Cesar Romero played The Joker in the 1960 television Batman TV series, followed by Jack Nicholson's and Heath Ledger's portrayals in Batman films.

"His creative work is immortal as co-creator of The Joker, Robin the Boy Wonder, and the visualizations of Alfred, The Penguin and many more," Uslan said. "Jerry elevated comic books as art and fought for respectability for all his fellow artists."

Robinson's role in the creation of The Joker is a long-running controversy in the comics industry. Kane downplayed Robinson as his assistant at the time.

But those now working for the DC Entertainment issued statements Thursday making it clear they credit Robinson for his creative contributions.

"Jerry Robinson illustrated some of the defining images of pop culture's greatest icons," DC Entertainment Co-Publisher Jim Lee said. "As an artist myself, it's impossible not to feel humbled by his body of work. Everyone who loves comics owes Jerry a debt of gratitude for the rich legacy that he leaves behind."

"It's impossible to work at DC Entertainment without feeling the impact of Jerry Robinson's contributions to the industry," DC Entertainment Editor-in-Chief Bob Harras said. "His influence continues to resonate today."