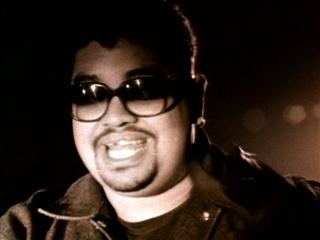 Heavy D, the smooth-talking and cheerful rapper who billed himself as “the overweight lover M.C.,” died in Los Angeles on Tuesday. He was 44.

The Los Angeles County coroner’s office confirmed the death Tuesday evening, saying that Heavy D had collapsed at his home and was taken to Cedars-Sinai Medical Center, where he died shortly after noon. The cause of death was not known as of Tuesday night, but the Beverly Hills police said that there was no evidence of foul play and that the death appeared to be “medically related.”

In the late 1980s and early 1990s, Heavy D was one of hip-hop’s most popular and charismatic figures, a girthy slickster who was an eager seducer and was unafraid of the dance floor. He was the frontman of Heavy D & the Boyz, which became the first act signed to Uptown Records, the label that was integral in building the bridge between hip-hop and R&B.

Thanks in part to production from the New Jack Swing auteur Teddy Riley that matched hard-snapping drums with sensual melodies, Heavy D & the Boyz became key figures in the softening of hip-hop’s sharp edges. The group released five albums between 1987 and 1994, three of which went platinum: “Big Tyme” (1989) “Peaceful Journey” (1991) and “Nuttin’ but Love” (1994).

At the time, blending hip-hop and R&B was still something of a novelty, but Heavy D’s work felt seamless. He was a nimble and jubilant-sounding rapper who always chose charm over aggression.

Most of the group’s early hits — songs like “Mr. Big Stuff” and “Gyrlz, They Love Me” — were cheeky, as Heavy D, a flamboyant dresser and an outsize personality, set the template for plus-sized hip-hop Lotharios. By 1991 he had moved on to straightforward love songs like “Is It Good to You” and his group’s biggest hit, “Now That We Found Love,” based on a cover version of a classic O’Jays song by the reggae band Third World.

“Peaceful Journey,” the 1991 Heavy D & the Boyz album, was dedicated to the dancer Trouble T-Roy, one of the Boyz, who died from a fall while the group was on tour in 1990. Mr. Dixon’s death also inspired Pete Rock & CL Smooth’s “They Reminisce Over You (T.R.O.Y.),” one of hip-hop’s essential tribute songs.

Heavy D was born Dwight Errington Myers on May 24, 1967, in Mandeville, Jamaica, and grew up largely in Mount Vernon, N.Y. His mother worked as a nurse and his father as a movie equipment repairman.

In the mid-1990s he became the president of Uptown Records, and in several other ways his influence extended beyond his albums. He recorded the theme song to the popular comedy variety show “In Living Color”; recorded hit songs with both Michael Jackson (“Jam” in 1991) and Janet Jackson (“Alright” in 1990); and had a hilarious cameo in the video for “One More Chance,” an early hit for the Notorious B.I.G., who followed in Heavy D’s big-man footsteps.

Though Heavy D continued to record music — including a reggae-influenced album, “Vibes,” in 2008 — and performed as a rapper as recently as the 2011 BET Hip-Hop Awards this summer, he was better known in recent years for his acting work. He had recurring roles on TV shows including “Roc,” “The Tracy Morgan Show” and “Boston Public,” and parts in films including “The Cider House Rules” and the current “Tower Heist.”