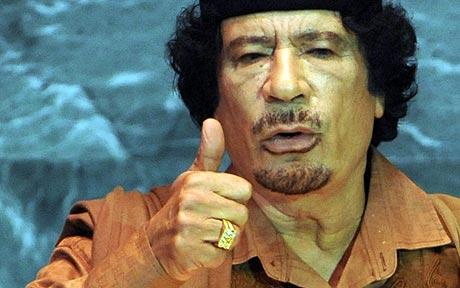 There are reports that deposed Libyan leader Moammar Gadhafi has been either captured or killed.

[Update 9:21 a.m. ET] Rebels said Moammar Gadhafi was killed when fighters attacked the house where he was Thursday, National Transitional Council Information Minister Mahmoud Shamman told CNN. "He tried to flee and they killed him. When they met him, he was alive and he was killed in action," Shamman said. Shamman said the NTC's chairman or prime minister will officially confirm the death.

Abubaker Saad, who worked for Gadhafi for nine years, spoke to CNN via Skype. He viewed a photo that news agency AFP says is Gadhafi bloodied and captured. Saad said he is "90 percent" sure that the man in the photo is Gadhafi. Saad said he is "thrilled" at the news and that it was crucial to have Gadhafi captured or killed - either one - because as long as he was alive or free, he could possibly rally supporters and maintain some level of power.

[Update 9:04 a.m. ET] Most Western governments declined to comment on the reports Thursday, with the U.S. State Department saying they could not confirm the media reports were correct. One exception was Dutch Prime Minister Mark Rutte, whose country took part in the NATO-led air operation in Libya, who said Gadhafi was in custody. "My assistant has just told me that Gadhafi really has been captured," Rutte said during a visit to Moscow. "I am glad that he has been captured." Listen to why Washington is hesitating to confirm reports. If reports are true, it is positive news for U.S. national security, CNN's Barbara Starr reports.

[Update 8:56 a.m. ET] Mahmoud Shamman, National Transitional Council Information Minister, tells CNN that a press conference will be happening soon about the alleged death of Gadhafi. Shamman said Gadhafi is dead and that is "a great victory" for the Libyan people. CNN's Dan Rivers spoke to him in Tripoli where crowds are cheering, shooting guns in a celebratory way and honking their horns.

Rebels said Gadhafi was killed when fighters attacked the house where he was Thursday, Shamman told CNN. "He tried to flee and they killed him. When they met him, he was alive and he was killed in action," Shamman said. Shamman said the NTC's chairman or prime minister will officially confirm the death.

CNN's Ben Wedeman, who covers the region and has covered Libya extensively, said that much caution should be used with these reports because false information has come out previously. It is being reported that Gadhafi was found in a storm drain. "It's a bit of surprise because we knew that he had escaped from Tripoli" with a lot of cash and weapons, Wedeman said. It would seem odd that Gadhafi would end up in a manhole-type of area, Wedeman said live on CNN.

[Update 8:47 a.m. ET] A cell phone photo, seen above, distributed by the Agence France-Presse shows the apparent arrest of former Libyan leader Moammar Gadhafi. In the photo, a man identified as Gadhafi appears wounded and bloodied.

Al-Ahrar, a National Transitional Council TV station, reports that Gadhafi is dead. The station didn't cite a source and the news couldn't be independently confirmed.

The White House has not confirmed the report of Gadhafi's death or capture, a senior administration official said Thursday.

Earlier Thursday morning CNN reported that revolutionary fighters said they had captured Gadhafi. That was reported on Libyan television Wednesday, Libya time. The report cited the Misrata Military Council. That report could not be independently confirmed by CNN. Around that time, the National Transitional Council military spokesman told CNN that reports of Gadhafi's capture are only rumors. Abdurahman Bousin added at that time that it was doubtful that Gadhafi was even in or around his hometown of Sirte.

Meanwhile fighters loyal to the NTC took control of Sirte Thursday, the council said. CNN's Dan Rivers is in Tripoli where massive crowds are cheering and honking their car horns. Many are shooting into the air in celebration.

[Update 8:07 a.m. ET] The State Department can't confirm reports about the capture or killing of Gadhafi, a spokeswoman said Thursday.

[Update 7:32 a.m. ET] A "big fish" has been captured in Libya, but a spokesman for the new rulers couldn't say for sure whether it was Gadhafi.