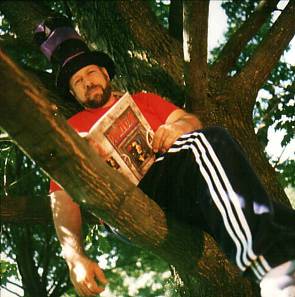 Michael Stern Hart, a burly rebel whose vision of a literate society led him to pioneer the electronic book decades before the spread of the Internet, has died. He was 64.

The founder of the online library Project Gutenberg, Hart had been in poor health and was found Tuesday at his Urbana, Ill., home, said Project Gutenberg Chief Executive Gregory B. Newby. An autopsy is underway to determine the cause of death.

Hart was a freshman at the University of Illinois in 1971 when he was granted free access to the campus' enormous mainframe computer. He was uncertain how to use the valuable computer time until inspiration struck in the form of a reproduction of the Declaration of Independence that had been stuffed in his grocery bag as part of a Fourth of July promotion.

He keyed the historic text into the computer system, which linked 100 users at elite institutions such as Harvard, UCLA and the Department of Defense. It was downloaded by six members of this pre-Internet network, which was encouragement enough for Hart to continue.

He transmitted the Bill of Rights, the Constitution, the Bible and the works of Shakespeare. Forty years later, Project Gutenberg, named after the inventor of the Gutenberg printing press, is one of the oldest online collections of literature, offering more than 33,000 free books in 60 languages. The vast majority are public domain, and all are digitized by volunteers scattered around the globe.

Hart was "an ardent technologist and futurist," said Newby, a University of Alaska computer scientist. Long before the invention of personal computers and electronic readers, "he predicted that information contained in books and other media would surround us and be freely available."

Others compared him to publishing pioneers such as Barney Rosset, who championed intellectual freedom through Grove Press, which published controversial authors such as D.H. Lawrence and Henry Miller. "What Barney Rosset, legendary founder of Grove Press, was to the printed book, Michael Hart was for the digital book: animated by an unremitting vision, idiosyncratic but immensely capable," independent publisher Richard E. Nash said by email Thursday.

A self-described "cyber-hippie," Hart was born in Tacoma, Wash., on March 8, 1947. His father was a Shakespeare scholar and his mother a mathematician.

Before going to college, he was a street musician in San Francisco and served a stint in the Army. He studied briefly at Dartmouth College before entering the University of Illinois at Urbana-Champaign in 1971. An obstreperous student who enjoyed challenging his professors, he graduated in two years with the highest grades.

To support himself and Project Gutenberg, he held a variety of odd jobs, including installing and repairing hi-fi stereos. His enthusiasm for the future of electronic publishing won him a non-paying appointment at Illinois Benedictine College, which provided him standing to solicit donations for his literacy project.

He rarely collected a salary from Project Gutenberg, according to Newby, who described Hart in an online tribute as "frugal to a fault."

"He used home remedies rather than seeing doctors. He fixed his own house and car. He built many computers, stereos and other gear, often from discarded components," Newby wrote.

He also was a skillful garage sale scavenger, whose house, according to a friend, was "a cross between a trash heap and a museum."

Briefly married, he is survived by his mother, Alice, and a brother, Bennett.

Project Gutenberg grew slowly during its first 18 years. By August 1989 it had completed its 10th e-book, the King James translation of the Bible. A few years later, he typed in Lewis Carroll's "Alice's Adventures in Wonderland," which brought an epiphany. He was talking to a friend on the telephone when her 11-year-old invited some friends over to read "Alice" on their computer. When they all tried to squeeze in front of the monitor on one chair, it broke into pieces and they crashed to the floor. But they wanted to keep reading.

When Hart heard about the incident, "the light went on in my head." He began concentrating on converting literary texts to e-books, convinced that the future of literature was electronic. From that day forward, "any time anyone owed me a favor," he recalled in a 1996 article in the Fort Worth Star-Telegram, "it was, 'Here, type in some Hamlet.'"

The online collection grew exponentially over the next two decades, fulfilling an expansive range of reading tastes. The most-read book is "The Kama Sutra of Vatsyayana" with more than 25,000 downloads, followed by "The Adventures of Sherlock Holmes," with more than 18,000 downloads. Project Gutenberg also releases collections on free CDs and DVDs.

In 1998, Wired magazine named Hart to its "Wired 25," a list of people around the world who were "actively, even hyperactively, inventing tomorrow."

Hart had his critics. He was often disparaged by academics, who complained of typographical and other errors in Project Gutenberg books. He was not beloved in the traditional publishing world, which he often attacked for profiting on the works of long-dead writers. He disapproved of U.S. copyright laws, which keep popular works out of the public domain for decades after an author has died.

"I'm not doing this to make the academic community happy," he told the Chicago Tribune in 1999. He aimed to serve the masses. "I am a revolutionary in this neo-industrial revolution. That's why they have trouble with me. How can anyone be troubled by free information?"