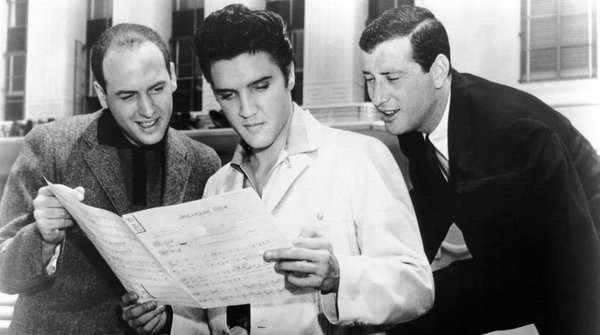 Jerry Leiber, the lyricist who, with his partner, Mike Stoller, wrote some of the most enduring classics in the history of rock ’n’ roll, including “Hound Dog,” “Yakety Yak,” “Stand By Me” and “On Broadway,” died on Monday in Los Angeles. He was 78.

The team of Leiber and Stoller was formed in 1950, when Mr. Leiber was still a student at Fairfax High in Los Angeles and Mr. Stoller, a fellow rhythm-and-blues fanatic, was a freshman at Los Angeles City College. With Mr. Leiber contributing catchy, street-savvy lyrics and Mr. Stoller, a pianist, composing infectious, bluesy tunes, they set about writing songs with black singers and groups in mind.

In 1952, they wrote “Hound Dog” for the blues singer Big Mama Thornton. The song became an enormous hit for Elvis Presley in 1956 and made Leiber and Stoller the hottest songwriting team in rock ’n’ roll. They later wrote “Jailhouse Rock,” “Loving You,” “Don’t,” “Treat Me Nice,” “King Creole” and other songs for Presley, despite their loathing for his interpretation of “Hound Dog.”

In the late 1950s, having relocated to New York and taken their place among the constellation of talents associated with the Brill Building, they emerged as perhaps the most potent songwriting team in the genre.

Their hits for the Drifters remain some of the most admired songs in the rock ’n’ roll canon, notably “On Broadway,” written with Barry Mann and Cynthia Weil. "Spanish Harlem," which Mr. Leiber wrote with Phil Spector, gave Ben E. King his first hit after leaving the Drifters. Mr. King's most famous recording, "Stand By Me," was a Leiber-Stoller song on which he collaborated.

They wrote a series of hits for the Coasters, including “Charlie Brown,” “Young Blood” with Doc Pomus, “Searchin’,” “Poison Ivy” and “Yakety Yak.”

“Smokey Joe’s Cafe,” a 1954 hit written for the Robins, became the title of a Broadway musical based on the Leiber and Stoller songbook. In 1987, the partners were inducted into the Rock and Roll Hall of Fame.

“Jerry Leiber and Mike Stoller have written some of the most spirited and enduring rock ’n’ roll songs," the hall said in a statement when they were inducted. “Leiber and Stoller advanced rock ’n’ roll to new heights of wit and musical sophistication.”

Jerome Leiber was born on April 25, 1933, in Baltimore, where his parents, Jewish immigrants from Poland, ran a general store. When Jerry was 5, his father died and his mother tried, with little success, to run a small store in one of the city’s worst slums. When he was 12, she took him to Los Angeles.

It was while attending Fairfax High in Los Angeles and working in Norty’s Record Shop that he met Lester Sill, a promoter for Modern Records, and confessed that he wanted to be a songwriter. After Sill urged him to find a pianist who could help him put his ideas onto sheet music he met Mr. Stoller through a friend, and the two began writing together

“Often I would have a start, two or four lines,” Mr. Leiber told Robert Palmer, the author of “Baby, That Was Rock & Roll: The Legendary Leiber and Stoller” (1978). “Mike would sit at the piano and start to jam, just playing, fooling around, and I’d throw out a line. He’d accommodate the line — metrically, rhythmically.”

Within a few years they had written modestly successful songs for several rhythm-and-blues singers: “K.C. Lovin’ ” for Little Willie Littlefield, which under the title “Kansas City” became a No. 1 hit for Wilbert Harrison in 1959.

In 1952, Sill arranged for Mr. Leiber and Mr. Stoller to visit the bandleader Johnny Otis and to listen to several of the rhythm-and-blues acts who worked with him, including Big Mama Thornton, who sang “Ball and Chain” for them. Inspired, the partners went back to Mr. Stoller’s house and wrote “Hound Dog.”

“I yelled, he played,” Mr. Leiber told Josh Alan Friedman, the author of “Tell the Truth Until They Bleed: Coming Clean in the Dirty World of Blues and Rock ’n’ Roll” (2008). “The groove came together and we finished in 12 minutes flat. I work fast. We raced right back to lay the song on Big Mama.”

In 1953 they formed Spark Records, an independent label, with Sill, but without national distribution it failed to score major hits. Atlantic Records, which had bought the Leiber and Stoller song “Ruby Baby” and “Fools Fall in Love” for the Drifters, signed them to an unusual agreement that allowed them to produce for other labels. The golden age of Leiber and Stoller began.

Their seemingly endless list of hit songs from this period included “Love Potion No. 9” for the Clovers (later a hit for the Searchers).

In the mid-1960s, Mr. Leiber and Mr. Stoller concentrated on production. They founded Red Bird Records, where they turned out hit records by girl groups like the Dixie Cups (“Chapel of Love”) and the Shangri-Las (“Leader of the Pack,” “Walking in the Sand”).

They sold the label in 1966 and worked as independent producers and writers. Peggy Lee, who had recorded their song “I’m a Woman” in 1963, recorded “Is that All There Is?” in 1969.