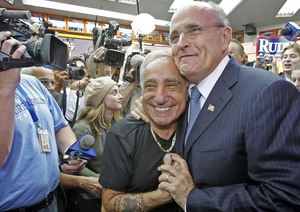 PHILADELPHIA (AP) — Joey Vento, the owner of a landmark south Philadelphia cheesesteak stand who told customers to order in English, has died at age 71.

Vento's nephew Joseph Perno, a manager at Geno's Steaks, told The Associated Press that Vento had a massive heart attack and died Tuesday. He said family members had just gotten out of the hospital and wouldn't be making any immediate statements.

In November, Perno said Vento had been diagnosed with colorectal cancer a few months earlier and was to have surgery at Memorial Sloan-Kettering Cancer Center in New York City.

Longtime friend Domenic Chiavaroli told the Philadelphia Daily News and The Philadelphia Inquirer that Vento had been at the cheesesteak stand Tuesday morning, as he was every morning before opening, but went home to Shamong, N.J., later in the day and told his wife that he wasn't feeling well.

"I've been coming here since 1967," Chiavaroli said. "Joe was a good guy. He always tried to help everybody."

According to Geno's website, Vento learned the cheesesteak business from his father, who had opened Jim's Steaks in the early 1940s. The site says Vento opened Geno's in 1966 "with $6 in his pocket, two boxes of steaks and some hot dogs."

He came up with the name after seeing a broken door in the back of his store upon which a neighborhood boy named Gino had painted his name, and he changed it to Geno's to not conflict with a food chain of the era, the site says. The south Philadelphia location, however, was a given, because "he figured that if he was going to sell a steak, he had to be where they were already eating them."

Geno's and its chief rival across the street, Pat's King of Steaks, have become the focus of an area described as "ground zero for cheesesteaks," a traditionally Italian community that has grown more diverse with an influx of immigrants from Asia and Latin America and is a popular tourist destination.

In June 2006, Vento and Geno's made headlines over two small signs posted at the shop stating, "This is AMERICA: WHEN ORDERING 'PLEASE SPEAK ENGLISH.'"

Vento said he posted the signs because of concerns over the debate on immigration reform and the increasing number of people who couldn't order in English.

Vento said he never refused service to anyone because he or she couldn't speak English, but critics argued that the signs discouraged customers of certain backgrounds from eating at the shop.

Amid extensive publicity, the city's Commission on Human Relations began looking into whether Vento was violating Philadelphia's ordinance banning discrimination in employment, public accommodation and housing on the basis of race, ethnicity or sexual orientation. The following year, the commission found probable cause against Geno's for discrimination.