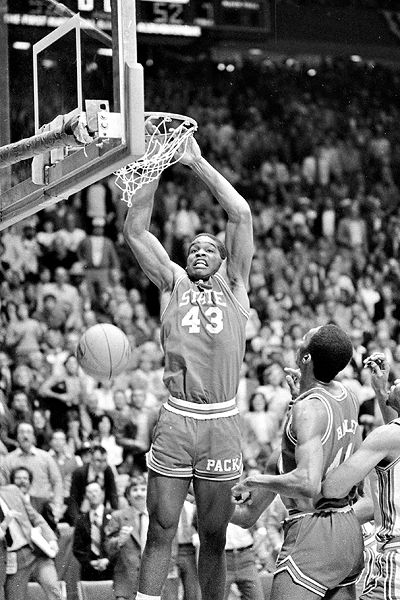 RALEIGH, N.C. -- Lorenzo Charles, the muscular forward whose last-second dunk gave underdog North Carolina State a stunning win in the 1983 national college championship game, was killed Monday June 27, 2011 when a bus he was driving crashed along a highway, a company official said.

Elite Coach general manager Brad Jackson said Charles, 47, worked for the company and was driving one of its buses on Interstate 40. No passengers were aboard.

Charles grabbed Dereck Whittenburg's 30-foot shot in the 1983 title game and dunked it at the buzzer to give the Wolfpack a 54-52 win over heavy favorite Houston and its second national title, sending coach Jim Valvano spilling onto the court, scrambling for someone to hug in what has become one of the lasting images of the NCAA tournament.

"It's a terrible day for the '83 team, a terrible day," Whittenburg said. "He's just a positive, a warm spirit. On the court, he never smiled. He was a competitor. He was tough and all that. Off the court, he was a gentle giant. Man, he came with that bubbly smile."

Whittenburg said he was recently with Charles at the memorial service for former NC State assistant Ed McLean, who died in late April, and then saw him when Whittenburg was honored at a Wolfpack game earlier this season.

"You get him on the court, he was like a big bear. Off the court, a wonderful, wonderful kid," Whittenburg said.

Sidney Lowe, Charles' teammate and NC State's coach through last season, said he was just with Charles two weeks ago.

"His smile. Always a good guy. Always. He always made you feel like he was excited to see you,'' said Lowe by telephone, who was audibly upset over Charles' death. "That's what I remember about him. He had the biggest smile. He was excited to see you. He was always just so positive. We talked about things. He always just had the right thing to say. He didn't talk much but when he did he was profound and supportive. He's just a good guy."

Charles secured his spot in NC State lore 28 years ago in the final moments of the Wolfpack's matchup with Houston in the national final.

"It's still kind of amazing to me that ... people are still talking about it," Charles said in an excerpt from his comments about the championship game on his NC State web page. "I remember when (it) first happened, I figured I would have my 15 minutes of fame and that would be it. Here we are and it is still a conversational piece. I don't really think that was the only great Final Four finish that has been played since then, but for some reason people just single out that game and talk about it. Maybe because it was such a David and Goliath thing."

Police released few details about the one-vehicle crash that took Charles' life. Video shows the windshield broken out with tree limbs sticking through the window frame. The rear wheels of the bus were on an embankment, leaving the right front tire elevated from the road.

In the 911 call, a frantic woman says a coach bus came off the exit ramp, down a hill and onto Interstate 40.

"I think it must have been exiting or coming onto 40 westbound and instead of taking the ramp down, it went through the trees and over the hill," she said. "It's tilted pretty far sideways."

She later noted that someone got on the bus and appeared to be giving CPR. In radio traffic about the wreck, authorities note that the driver was unconscious and bleeding from his head.

Charles finished his college career two years after the championship win with 1,535 total points -- 15th on the school's scoring list -- and his .575 shooting percentage in 1985 remains a school record for seniors.

In the 1983 run, NC State entered the tourney with a 17-10 record, having beaten Virginia to win the Atlantic Coast Conference tournament and an automatic berth into the national field. Charles made two free throws with 23 seconds left in the West Regional finals against the Cavaliers to give the Wolfpack a 63-62 victory and spot in the Final Four.

Their semifinal win over Georgia sent them to the matchup with Houston, which featured future NBA greats Hakeem Olajuwon and Clyde Drexler. The Cougars, nicknamed "Phi Slama Jama" for their above-the-rim attack, were ranked No. 1 and had beaten No. 2 Louisville handily in the semifinals.

“He didn't realize how big that play was. He was very humble. That was his personality and character. If you talk about it. He wouldn't gloat. He stayed humble. That's who he was.”

-- NC State teammate Sidney Lowe
on Charles' miracle NCAA title winner Michael Young, director of basketball operations at Houston, was a member of that team. He told KRIV-TV in Houston that he had never quite gotten over Charles' heroics.

"For him to dunk the ball at that moment to win the game, it was one of the most heartbreaking moments I have ever felt in my whole career," Young said. "Twenty-eight years later, it's still with me. Every day somebody asks me about it. I thought I was going to get away with it today and then you called me. I'm very sorry to hear what happened."

Lowe said Charles never liked to have the spotlight of the historic shot on him.

"He was very humble about it to the point of almost feeling uncomfortable or embarrassed that people would talk about it," Lowe said. "He never was a person that thought he was better than anyone. He never acted that way. When he made the shot, he turned around like 'What?' He didn't realize how big that play was. He was very humble. That was his personality and character. If you talk about it. He wouldn't gloat. He stayed humble. That's who he was."

Lowe and Whittenburg stayed in the public eye by becoming head coaches. Lowe was fired as coach of his alma mater in March.

"Lorenzo was just happy with his life," Lowe said. "He certainly would have loved to have played longer in the NBA. He was one of those guys that never complained. He never complained about this or that opportunity. He just went on with his life and accepted it. He got involved in other things. You never saw him in a bad mood. I have never talked to him or seen him in a bad mood. I never talked to him where he had one negative thing (to say) about anybody."

"It's just hard to grasp," Lowe said. "It's just sad now when you talk about that team who have passed away. It's very difficult. You talk about special moments in your life and relationships you have and things you cherish and that's something no one can ever take away from us. We experienced something a lot of athletes will never experience. We have a bond that will never be broken. When I tell you he was a loyal friend to the end -- he was. He was a loyal friend to the end."

New NC State coach Mark Gottfried said he was with Charles on Sunday night after he had come by the team's camp earlier in the day.

"I'm just shocked and saddened," Gottfried said. "Our whole staff sat around with him for a half-hour and told stories (Sunday). We had camp going on and he just came by the camp."

Gottfried said he had reconnected with Charles last week after landing the Wolfpack job in the spring after his stint as an ESPN analyst. Gottfried said Charles played against his Alabama team when he was a junior with the Tide.

"We shared stories about our playing days," Gottfried said. "We had a great time reminiscing. He was so full of life. I'm so stunned. Not only did NC State lose one of the all-time greats as a human being, everyone loved him. He was a big-hearted guy. Everyone from the NC State family is calling. They're all so saddened and stunned."

NC State retired Charles' No. 43 jersey in 2008, the 25th anniversary of its winning the NCAA title.

Thurl Bailey, one of Charles' teammates on the championship team, said it's tough to accept that the player who made the game-winning dunk is gone.

"But I heard someone say, I was talking to them on the phone about this, that Jimmy V finally found somebody to hug," Bailey told WRAL-TV.

Arizona State coach and former NC State coach Herb Sendek recalled the time he got to know Charles during his 1996-2006 coaching tenure with the Wolfpack.

"It's hard to express the tremendous loss that so many are feeling right now with this tragedy," Sendek said. "Lorenzo was a wonderful person and one of the true legends in NC State basketball history. His game-winning basket against Houston in the 1983 national championship game is forever carved on the minds of anybody who has ever followed the sport."

"As a former player, he made us believe in the amazing and all of us in the ACC send out our thoughts and prayers to his entire family," Swofford said in a statement.

Charles played one season in the NBA, averaging 3.4 points in 36 games with the Atlanta Hawks in 1985-86, and played internationally and in the Continental Basketball Association until 1999.