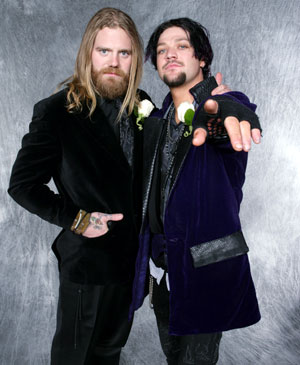 
Dunn and a passenger in his 2007 Porsche died after the car left the roadway and burst into flames, West Goshen Township police said. The crash occurred near the Philadelphia suburb of West Chester.

The 34-year-old Dunn appeared on MTV shows "Jackass" and "Viva La Bam" and the three "Jackass" big-screen adaptations. He also was the star of his own MTV show, "Homewrecker," and hosted "Proving Ground" on the G4 cable network.

According to a biography posted on his website, Dunn was born in Ohio and moved at age 15 to Pennsylvania, where he met Bam Margera on his first day of high school.

Dunn, Margera, Christopher Raab (known as Raab Himself) and Brandon DiCamillo, under the moniker CKY for "Camp Kill Yourself," started making videos that featured them skateboarding and performing stunts.

Dunn was working as a welder and at a gas station when Johnny Knoxville, a friend of Margera's through the skateboarding circuit, asked the crew to allow their videos to be part of the series "Jackass," which became a hit on MTV and ran from 2000 to 2002.

The passenger who died in the crash had not yet been identified, police said.